Toppling the House of Saud

Strange things are afoot in the House of Saud lately.

Perhaps the most mind-boggling of them all was the recent news that the country is considering a public offering of Saudi Aramco.

If you're scratching your head as to why this is such a significant move, keep in mind that we're talking about a national oil company that controls 261 billion barrels of conventional oil reserves and extracts upwards of 10.2 million barrels per day on a daily basis.

The only two countries that can boast anywhere near that amount of oil are Canada and Venezuela, whose reserves stand around 173 billion barrels and 297 billion barrels, respectively. Of course, you and I both know that these reserves consist of the heaviest, poorest-quality oil on the planet.

But before your mouth begins to salivate over the possibility of owning your own chunk of the mighty Ghawar wishing well, there are a few things to take into consideration.

First, I should note that nothing is concrete yet. Saudi Arabia would almost certainly only put up a small part of the company, which may or may not even include its E&P segment. If it does, however, you can bet the NOC will maintain full control of its giant fields — so much for your piece of Ghawar.

So what can we hope for? Well, the early speculation is that we'll be able to buy a stake in its refining subsidiaries.

That's actually not a bad deal in a low oil price environment, given today's refiners' access to cheap feedstock. A quick look at Exxon's upstream revenues is proof enough:

Exxon's earnings from its downstream operations (after income tax) during the first nine months of 2015 doubled, while its upstream earnings plummeted 71.7%.

To say that refining stocks are a sound play on cheap oil would be an understatement.

It's why shares of Valero jumped 46.3% last year, as the U.S. E&P sector struggled to stay afloat.

But you have to ask, what would possibly make the Saudis consider giving up part of their interest in such potentially valuable assets?

Their decision makes more sense when you understand the crisis that's brewing for the House of Saud...

Here's the problem: Saudi Arabia is spending money like oil is still at $100 a barrel.

They should know better.

Despite the fact that the price of Brent crude fell 56% during the second half of 2015, Saudi Arabia maintained its exorbitant budget. And even though the government expected total revenues to reach about $190 billion, it still went ahead and set its spending budget at $229.3 billion.

Thing is, they didn't have a choice.

Without dishing out billions of dollars on lavish social programs, social unrest would be inevitable. The Saudi government has been effectively bribing its citizens into complacency since well before the Arab Spring began more than five years ago. 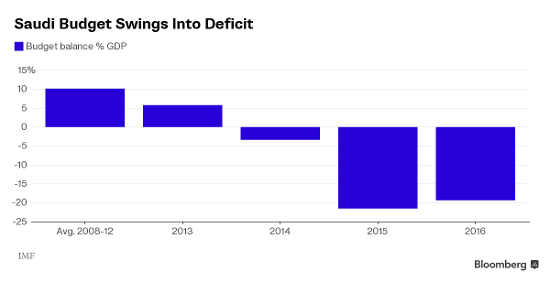 This probably isn't the time to stubbornly continue its oil price war.

I guess there's only one thing left to do...

In the past, the Saudis could always count on a good conflict to give a little boost to crude prices. Unfortunately, they're choosing a fellow OPEC member: Iran.

What started with the execution of a Shiite cleric turned into a spat between the two countries and ended up with both severing diplomatic ties.

You can always expect a little turmoil in the Middle East to get things going, right? Ten years ago, this news would have sent the price for a barrel of crude skyrocketing.

What happened the day the two cut relations? Oil dropped 1.6%. By the end of the week, the price of Brent crude tumbled another 8.7%.

So much for that.

Now it's looking as if oil prices will soon test sub-$30 levels.

What are my thoughts on this?

In the words of one of my colleagues, “Buy the f&*#ing bottom.”

I think there's going to be an unprecedented amount of money made in the oil sector. It may not be today, not just yet...

But the writing is clearly on the wall for investors shorting oil. Yes, oil prices are at incredibly low levels, and China's demand is anemic, only expected to grow about 3% this year. But I'm not selling during this storm.

I'll tell you precisely why on Friday.