There's an experiment taking place on U.S. soil as the entire world stage waits on bated breath for the outcome...

And it's been going on for years.

Others may not be convinced that there's a windfall of opportunity in the world's natural gas markets right now, but perhaps they're not looking in the right places.

Earlier this week, I showed you that some of those natural gas players were performing very well for investors, despite rock-bottom prices.

But there's a whole different way to play the shale boom... And the best part is that some of the most profitable players in it aren't even drilling!

Before we go any further, it's interesting to see how much the world is taking note of our progress — and there's more at stake for Europe than most believe.

In 2009, the United States overtook Russia as the world's largest natural gas producer.

Not surprisingly, our domestic production was boosted after tapping into our country's shale formations.

Russia, however, is still the undisputed leader in gas reserves: 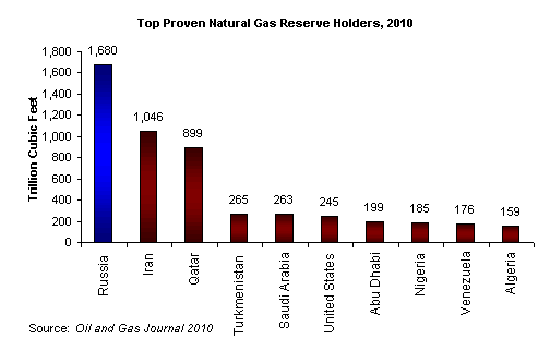 Russia also happens to supply Europe with about one-quarter of their natural gas demand.

If you went against the motherland, you can be assured that they won't hesitate to stop shipments. They've done it before.

Of course, Europe's troubles don't end with their dependence on Russian natural gas... Another 20% of their natural gas is imported from Algeria.

Algeria isn't some insignificant producer banking from some random oil or gas discovery; the country is the world's sixth largest natural gas producer.

And unless you've been living under a rock lately, you've heard about the crisis in the Middle East and Africa — as well as its effects global oil markets. That same unrest is spreading like wildfire...

Reports coming out of Algeria are plagued with similar volatility, including demonstrators being put down by police.

Then again, lowering that dependence on LNG is largely due to the surge in shale gas production.

So why would they care one iota about the shale boom in the United States?

Watching the shale boom grip the United States has given hope to several European countries, who are now eying their own shale resources.

It seems U.S. drillers are up for the challenge, too.

Continental Resources (NYSE: CLR), famous for its success in the Bakken formation in North Dakota, recently announced it's interested in drilling the Paris Basin in France.

Tapping into those resources could be a welcome surprise, especially for countries like Poland, which imports two-thirds of their natural gas is sent via Russian pipelines. The director of geology at Poland's Ministry of the environment has even referred to Polish shale gas as a gold rush of the 21st century.

And believe me, dear reader, there's more to extracting shale oil and gas than just drilling...

A better way to invest in the shale boom?

Sure, it's easy to point-and-pick between the drillers that are scooping up land like fiends.

Finding different ways to invest in the shale boom that's gripping the United States can be easier than you might first believe.

It's become routine for myself and my colleague, Steve Christ. Not a week passes that we don't broach the subject, particularly when it comes to a certain shale stock that we've been following for years...

Yet this stock doesn't own shale properties that you see other companies scrambling over each other to buy. Instead, they focus on improving those drillers' production.

The company's name is Carbo Ceramics.

One glance at their chart and you'll see the reason Steve and I get excited: 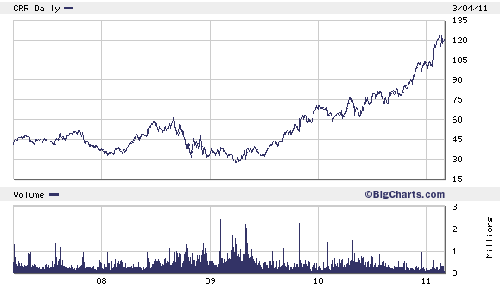 In a nutshell, Carbo manufactures a line of ceramic proppant.

To tap the oil and gas resources in shale formations, producers utilize a procedure known as hydraulic fracturing.

Basically, they pump fluids into the well with enough pressure to fracture the rock formation. Sand is typically used as a proppant to keep the fractures open... In using Carbo's ceramic proppant, however, companies are able to improve production.

This is an example of the kind of shale profits my readers have become accustomed to during the last few years.

Unfortunately, hydraulic fracturing has been cast onto the public stage by a clash with environmental opponents... I'll delve further into both sides of that fight within the next few weeks, but the larger point in all of this is that shale producers have other options to tap their oil and gas reserves.

One company that has reminded me time and again of a younger Carbo Ceramics.

Utilizing their "petro-fracking” technology, this tiny, relatively unknown stock is threatening to hush the environmental critics — and put an end to the hydraulic fracturing war.