Ever since the informal meeting in Algeria was announced, I was skeptical that the world’s largest oil producers would be able to come to an agreement to freeze output — especially after the failure we saw in Doha.

Quite frankly, I still am.

I’ll get to that in just a minute, however, because it turns out that the impossible was made possible; the stars aligned perfectly; it all fell into place; everything came up Millhouse... you get the point.

Needless to say, oil prices jumped nearly 8% on the news, trading above $48 per barrel: 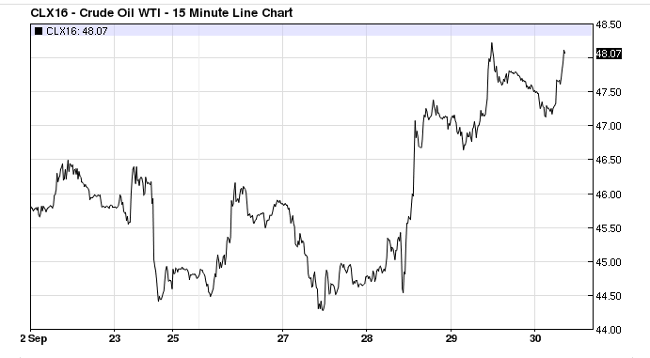 But who were the real winners from this oil production freeze? More importantly, will the rally last?

I’ll let you decide this one on your own.

Using 20/20 hindsight, maybe I should’ve seen this deal coming. Either way, there’s no question that all the credit should go to an incredibly crafty Algerian oil minister.

As members arrived for the meeting, they were whisked away to an isolated Sheraton resort that was located roughly 15 miles to the east of Algiers.

It was a brilliant move, really.

Think about it... he essentially forced both Iran’s and Saudi Arabia’s representatives to talk. In all honesty, did you see any other way to get these two stubborn producers to the table?

Well, it only took around five hours to lay out a plan to help stabilize oil prices. What this meant, of course, was the first OPEC output cut in nearly a decade.

But like I mentioned earlier, there’s a slight catch with the Sheraton deal... and it’s one reason my lingering doubts on this deal are still very much in place.

Miracle to Mess: The Real Winner from Algeria

A number of complications come to mind with regards to this production freeze deal.

I reminded you earlier this week that this was nothing more than an informal meeting and that any agreement would have to be ironed out in the oil cartel’s formal meeting. In other words, Saudi Arabia and Iran had absolutely nothing to lose in agreeing to a cut.

How long will it be before the next war of words is played out in the media? I’ll give them a few days until one of the two just won’t be able to resist the urge.

Then we have the problem of the cut itself.

Cutting production means only one thing: the return of quotas.

Now, my veteran readers know exactly why this is problematic — cheating on production quotas has been a running joke for decades!

I wouldn’t expect OPEC members to stick to their quota any more than I would expect Saudi Arabia to publish data on its oil fields.

Naturally, another issue is that OPEC will be cutting into an oversupplied market. Assuming the numbers don’t change, the deal will be taking roughly between 240,000 bbls/d and 740,000 bbls/d off the market.

That brings me to perhaps the biggest problem: awakening a sleeping giant.

Let me show you the real winner from the Sheraton deal...

You and I both know that higher oil prices will bolster drilling inside the Lower 48 states.

That alone brings up further issues that will put pressure on crude prices. Remember, more than 900,000 barrels per day has been taken off of the market by U.S. producers. If OPEC’s production cut were formally put into place (quotas and all), higher oil prices will inevitably lead to U.S. companies turning the taps back on.

But not all shale plays were created equal.

This time around, you won’t be able to blindly throw a dart against a wall and hit a bull's-eye. But even though the dynamics have changed greatly since 2009, you should always start your search in the heart of Texas.