Why do Arabs hate the dollar?

With the global warming lobbyists fighting the snow in Copenhagen, a small, unheralded piece of news popped up on my newsfeed.

It seems that while the green lobbyists were drinking scotch and counting the money soon to be made from carbon credits, the Arabs were driving another nail into the U.S. economy. The Gulf states are ditching the dollar.

End of an Era 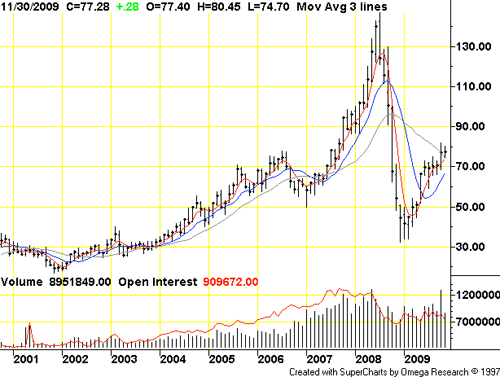 You simply can't make budget projections based on that kind of fluctuation.

After all, the Saudis have some 5,500 princes to keep in Maseratis and Benzes. They need champagne for their harems and steroids for their thoroughbreds. This type of lifestyle doesn't come cheap. The political cost for keeping the Saudis' regime in power has been estimated at more than $60 a barrel!

In answer to these problems, the Gulf states announced this week that they have formed their own monetary council based on the euro model.

According to the UK's Telegraph:

The Gulf monetary union pact has come into effect, the move will give the hyper-rich club of oil exporters a petro-currency of their own, greatly increasing their influence in the global exchange and capital markets and potentially displacing the US dollar as the pricing currency for oil contracts. Between them they amount to regional superpower with a GDP of $1.2 trillion (£739bn), some 40pc of the world's proven oil reserves, and financial clout equal to that of China.

Saudi Arabia, Kuwait, Bahrain, and Qatar are to launch the first phase next year, creating a Gulf Monetary Council that will evolve quickly into a full-fledged central bank.

How About Them Apples?

This is the biggest news I've heard in at least a month, and I've seen very little reporting on it in the U.S.

Here is the money quote: "The U.S. dollar has failed. We need to de-link," said Nahed Taher, chief executive of Bahrain's Gulf One Investment Bank.

Needless to say, one of the major benefits to the U.S. dollar's reign as global reserve currency is that it is the currency of oil.

The U.S. government continues to expand the money supply which inevitably leads to inflation.

If we get the high, double-digit inflation that many are predicting (due to the increase in money supply, coupled with oil traded in a new pan-Gulf state currency dubbed the Gulfo)... the U.S. currency will suffer.

Interest rates on U.S. debt will go up. Oil, gold, and other hard assets will increase in value. These are the sectors to invest in over the next decade.

As it is... the short-term prospects of a rise in oil price seems assured. Check out this chart on global crude oil stocks: 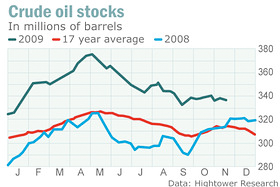 In the face of the global credit crisis and ensuing recession over the past year, oil companies stopped exploring and pumping new oil. Stockpiles have been decreasing.

If we get an uptick in GDP growth in 2010, as many expect, this will push up demand... which will lead to a price surge.

Big oil hasn't exactly embraced this idea. The drill utilization rates have been flat to down.

Americans Will Continue to Need Oil

Americans spend $400,000 every minute for imported oil. And despite the rhetoric in Copenhagen, the Department of Energy projects the demand to increase.

The government projects that, even if we take green fuels into account, the United States will require 2 million barrels more per day in 2030, and 1 trillion cubic feet more natural gas every year.

The only solution seems to be to increase domestic production of hydrocarbons.

If you include areas offshore and those restricted from exploration, the U.S. has an estimated 102 billion barrels of oil and 635 trillion cubic feet of natural gas.

In the western states, oil shale reserves alone are estimated to hold 800 billion barrels of oil — that's a lot of oil.

But there is one company my colleague Keith Kohl has been talking about... what he feels is the best way to play the need for increased domestic production: The Bakken Oil Field.

Keith writes, "The Bakken oil play stretches across Montana, North Dakota and into Southeastern Saskatchewan. We're talking about some potentially massive reserves of oil, too. The amount of oil in place has been estimated between 271 billion and 503 billion barrels of oil. Although that is only referring to total oil-in-place, a U.S. Geological Survey (USGS) field report released on April 10, 2008, estimated there are up to 4.3 billion barrels of undiscovered, technically recoverable oil on the U.S. side of the Bakken."

Ian Cooper of $20 Trillion Report writes, "Thar's black gold in them thar hills... this time in North Dakota. The discovery is huge. Unlike Northern Canada's oil sands, the Bakken's oil can be extracted relatively cheap, without the use of energy intensive processes... That news alone means North Dakota could be headed for a boom oil year. In January 2008 alone, the North Dakota Oil and Gas Division issued 90 permits to drill. At that pace, the number of permits could double those of last year, and be near the record 1,098 issued in 1981, according to reports."

It is obvious that the dollar will continue to fall over the long term. The pricing of oil in Gulfos will mean that imports of oil will surge in dollar terms.

I encourage you to invest in domestic production before it's too late. Click here for the free report.

(and soon-to-be-launched Crisis and Opportunity)