Oil, oil, everywhere, but not a drop to burn.

Oil, oil, everywhere, even as their drills turn.

We’ve been watching the deathward spiral of Venezuela’s oil industry for the last few years, and every time I see a chart of Venezuela oil production, I cringe.

You can see that painful picture for yourself below:

That’s the last 10 years of Venezuelan oil production, and the recent numbers are even worse. The latest reports showed that Venezuelan output fell to just 1.3 million barrels per day in June. For the record, that’s a month-over-month decline of about 48,000 barrels per day.

But let’s put a little perspective on that, shall we? That’s the lowest it’s been since the country helped found OPEC back in 1960 — 58 years ago!

More importantly, there is absolutely no realistic way Venezuela turns things around.

That’s going to have serious consequences for global markets...

And one hell of an opportunity.

All year, we’ve talked about a host of bullish catalysts for oil.

I know more than a few of you can rattle some out right off the top of your heads.

Whether it’s the severe lack of investment that has been made in recent years by oil companies, the looming Iranian sanctions and the threat of “zero tolerance” by the United States, or, heaven forbid, if the powder keg that is the Middle East finally blows, right now it’s simply a matter of how high crude prices will rise from here.

And no, Trump releasing our strategic reserves would be a terrible idea. Sure, it would put some short-term pressure on prices, but that’s nothing more than a band-aid.

But let’s take a second and look at this particular situation.

Even the oil they’re pumping now comes with some pretty incredible caveats.

Perhaps you remember when the Chinese bailed out Venezuela with billions of dollars in loans, the terms of which allowed Venezuela to pay back China with oil.

What you may not realize is that those payments account for nearly 30% of Venezuela’s production. That’s almost 400,000 barrels per day at this point.

According to Reuters, that comes out to roughly $7 billion in annual revenue for Maduro’s administration.

Don’t expect anyone else to bail out Venezuela, either. There’s a saying that immediately comes to mind: fool me once, shame on you; fool me twice, shame on me.

When the final nail is hammered into PDVSA’s coffin, that’s 1.3 million barrels per day that we can take away from global supply. Throw in the loss of Iranian exports due to sanctions that are set to take effect, and you have to wonder if the rest of the world can make up for these shortfalls.

You can understand now why Russia and Saudi Arabia are willing to increase production.

I know what you’re thinking...

Always keep the fundamentals in mind during this bullish oil cycle.

Looking at the latest projections from the EIA, the supply/demand balance is going to be extremely tight as it is now: 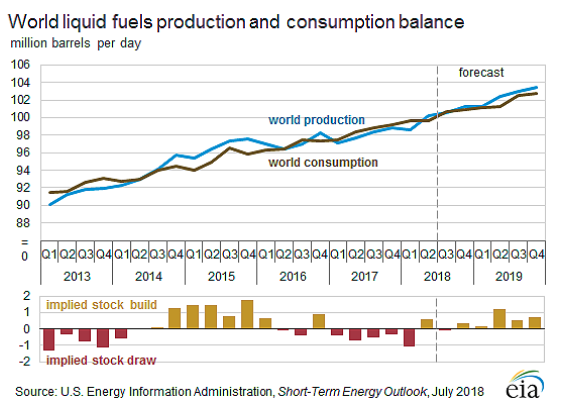 The fact that demand has outpaced supply since early 2017 is one of the reasons I’m not shocked that WTI prices have steadily risen in recent years.

But what happens when (not if) Venezuela’s oil industry collapses?

Where would we make up that supply? There are serious questions right now over Saudi Arabia’s ability to boost production much further.

Naturally, 7.4 million barrels per day of that total — or about 68% — comes directly from just seven tight oil plays.

And roughly 45% of THAT crude oil is pumped out of the Permian Basin.

All that’s left for individual investors is to separate the wheat from the chaff.

In the coming weeks, that’s precisely what and you and I are going to do as we delve into the hidden investment gems still lurking in West Texas.