Most people are idiots. The majority of people will buy high and sell low. When something is hot, everybody wants it. When it is on sale, you can’t get a bid. That's the nature of markets.

When I first recommended Bitcoin to my Bubble and Bust Report readers in May of 2016, few people had heard about it, and fewer still were inclined to invest. And yet when I said to sell it in January of 2018 for a 2,528% gain, those people who did ride along for the big win were upset...

And those who didn’t buy wanted to buy at the top, not sell. Only a fool would sell at $16,000, they’d claim. But the gains had been made — the people at the deli were talking about Bitcoin. Young people told me I didn’t understand it, that this time was different.

It wasn’t; it was more of the same. Another boom and another bust. The money isn’t made on the sell during the boom; it’s made after the bust on the buy.

Here is another recent example: What do you think the best-performing country ETF was last year? Would you guess the Indian Small-Cap ETF (SMIN)?

You might not if you remember the chaos when the Indian government got rid of cash and destroyed liquidity by pulling in all rupee notes worth over $5, plunging small businesses into ruin.

But if you saw the sell-off as a buying opportunity, you would have made 72% on your money. Not bad for a boring old ETF. 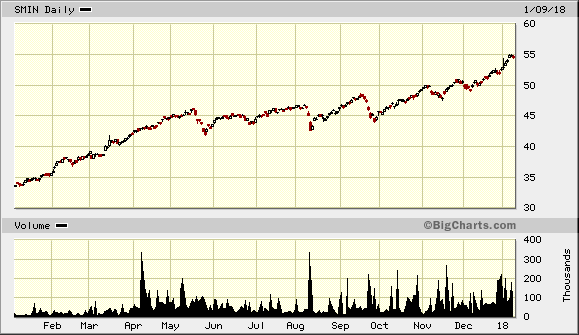 That’s the nature of it. After everyone has sold, there is no one left but buyers. Which is why you should ask yourself, what is the most hated sector in the market?

In this day and age, I would suggest oil and oil stocks. The market narrative is that the world is awash in cheap oil due to fracking, and besides, the internal combustion engine will go away due to electric vehicles.

None of that is true. In fact, oil demand is growing rapidly and will soon eclipse supply. There are all sorts of bottlenecks.

Here is what the IEA said in its latest report:

Global oil supply in February eased to 97.9 mb/d and was up by 0.7 mb/d on a year earlier due to higher non-OPEC output. Strong growth in the US is expected to boost this year's non-OPEC expansion to 1.8 mb/d compared to 760 kb/d in 2017.

OECD commercial stocks rose in January for the first time in seven months to reach 2 871 mb. However, the 18 mb increase was only half the usual level. The surplus to the five-year averaged fell to 53 mb. Cushing crude stocks reached their lowest level in three years.

The IEA also put out this handy chart, which says we are nearing a supply shock. 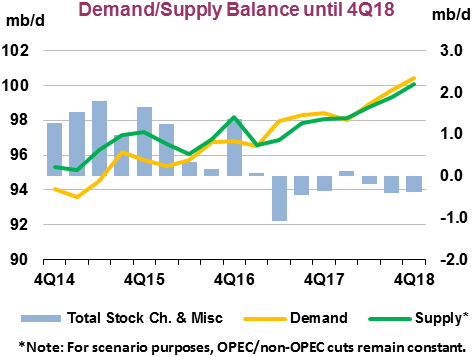 We are many years into the current price cycle of oil, which started in 2014 and hit bottom in the spring of 2016. Right now the oil price has doubled off the bottom and has broken out of its wedge formation.

Oil and gas prices are higher. You may have noticed at the pump. I paid $3.07 a gallon yesterday to fill up the wife’s behemoth for a total of more than $70. Refinery utilization is over 95%, and we are heading into the summer driving season.

Oil moves on the margins when the supply/demand equation gets tight. There are any number of geopolitical scenarios that could push oil back to $90: sanctions on Russia and/or Iran; the fall-off in Colombian and Brazil oil production; the bottleneck in the Permian basin pipeline; Libyan wars and Saudi Arabian IPOs...

No one knows what could light the match, but a good investor will buy low in a hated sector that is showing signs of an early rebound.