This summer, we saw the House respond to $4 gas by passing a package of bills designed to expand our domestic drilling activity.

Whether or not the bills make it through the governmental red tape and not be weighed down by Senate remains to be seen...

But is it really that much of a stretch?

After all, there's only one way to increase production: drilling.

And we've certainly seen drilling over the last two years.

Right now, there are about 1,855 oil and gas rigs operating in the United States. Although the count slipped a little over the previous week, there's no mistaking the trend.

Two years ago, that number was at a mere 876; we're more than 21% higher than the number of rigs running a year ago.

It's no secret that the number of rigs drilling for oil has finally overtaken the number of natural gas rigs — the first time this has occurred in sixteen years.

With oil still trading steadily around $100 per barrel, coupled with the pro-drilling sentiment coming out of Washington, one sector stands to gain the most: offshore drillers.

That seems to be president's mantra as of late.

It has to be. How else does he expect to make good on his promise to reduce U.S. dependence on foreign oil?

Besides, some of those countries that sate our crude addiction won't be able to help us out anyway. Take the Saudis, for example.

For years, we've been told production could easily top 15 million bbl/d or more, with a few million barrels in spare capacity to boot.

Apparently, that's not the case.

The Saudis recently reported production is likely to average 8.7 million bbl/d in 2015, increasing to 10.8 million bbl/d by 2030 — and even that is wishful thinking.

In other words, production will practically remain flat for a few years, then experience a 1.5% annual increase for the next decade and a half.

But President Obama has made it perfectly clear where we're going for our oil fix. His weekly address last Sunday reiterated the offshore drilling boom.

Understandably, there were a few more-than-careful phrases he had to toss in his speech, like “safe and responsible” oil production. And we can't really blame him for the extra care he used, especially when broaching the subject of expanding offshore drilling in the Gulf of Mexico.

Yet investing in American energy isn't limited to just U.S. drilling — a fact which becomes increasingly clear with every mention of Brazil's offshore potential from the Tupi discovery.

The government's recent bullishness for drilling is just another reason to take a second look at a few of your offshore stocks.

Where to begin? It's a question that nearly filled my inbox a week ago.

Although we've discussed several of these offshore plays in the past, their long-term performance is there: 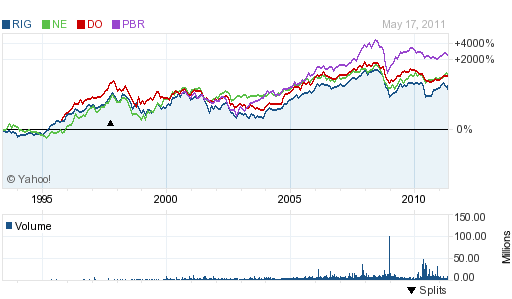 Noble is another offshore drilling contractor that's constantly on our radar, operating 76 total rigs throughout the world. Holding a 10.1 billion market cap, Noble was recently awarded six contracts in the Gulf of Mexico. The company also has six rigs operating off the coast of Brazil.

In their most recent fleet report, Diamond Offshore has shown that it has signed two drilling contracts with Anadarko Petroleum worth $1.8 billion. Each of their two new-build drill ships is contracted for the next five years, and are expected to begin drilling within the next two years.

Petrobras is no stranger to my readers. This Brazilian driller is at the heart of the Tupi discovery. When Obama began salivating over offshore production, Brazil was near the top of the list. And he's said before that we may become one of their best customers.

Petrobras has recently attracted the attention of investment billionaires like George Soros, whose firm now owns 1.1 million shares of the state-owned oil company.

P.S. Similar to the shale boom that's happening across the United States, expanding our offshore drilling isn't going to solve our upcoming energy crisis... But an accidental discovery made by an Argentinean geologist is threatening to turn the energy sector on its head. His mistake could end up making investors a small fortune.