I have a love/hate relationship with nuclear power.

On the investment side, I'm extremely bullish and have already been cleaning up on a handful of uranium plays. I'll tell you more about those in a moment.

The bottom line is that no matter how you slice it, there is a very real boom in nuclear power development right now. China, South Korea, India, Saudi Arabia — all across the globe, there are nearly 200 planned reactors under construction or in early development stages.

As an investor, I know this is where I must dedicate a small percentage of my energy portfolio — along with domestic oil and gas, renewables, and yes, even coal.

Sure, Fukushima is still a very clear memory for many of us. And I don't buy for a second that cleanup at Fukushima is going smoothly or that we should feel safe eating certain foods imported from Japan. The FDA issued its 2014 update, which stated it has no evidence that this food would pose a public health concern. This is also the same bureaucracy that's run by former Big Ag lobbyists and yes-men.

Truth is, anything the FDA or the government of Japan says regarding health risks stemming from Fukushima has about as much credibility as the Federal Reserve's track record.

Of course, all this aside, I still believe there's a boatload of money to be made in nuclear. And we're going to continue to make it.

I won't spend too much time on my soapbox here, as this really isn't the place for that.

However, before I dive into why you should definitely be buying uranium right now, let's clear a few things up.

First of all, the Fukushima disaster was not a crisis because the process of nuclear power generation is inherently unsafe — it was a crisis because of human error. Lax policies, sub-par safety procedures, and poor logistical planning were to blame, not the splitting of isotopes.

I don't distrust nuclear physics. I just don't really trust people so much — especially those who tend to make the types of decisions that affect public safety. This is probably why I'm so critical of government efforts to “protect” us.

I know this may not be particularly politically correct, but I have a really hard time feeling comfortable with some of these regions looking to build hundreds of nuclear power plants.

China still has a lot of “quality control” issues to deal with. I don't trust the food that comes from China, much less a nuclear power plant built there.

India, meanwhile, still needs help from the International Monetary Fund to build its outdated — and in some cases non-existent — infrastructure. It's kind of like having babies. If you can't afford one, please don't have one and expect others to pay for it. The last thing we need is a handful of half-built nuclear power plants left in unguarded, poverty-stricken areas.

And the Middle East?

Folks, no offense, but unstable regions don't typically strike me as the most desirable places to build nuclear power plants.

And speaking of instability, I'm not feeling particularly excited about the increase in nuclear power development in Russia, either.

I'm not saying the folks in these regions don't have a right to build nuclear power plants. They absolutely do, and it's arrogant as hell to believe the United States has any business dictating who can and cannot power their homes and buildings with nuclear power.

It's not that we're particularly safe, anyway. After all, in the U.S., nearly half of our fleet of nuclear reactors is operating while being in full violation of fire safety regulations. And according to the Nuclear Regulatory Commission, the risk of reactor meltdown due to fire is estimated at about 50%.

So with my clear lack of confidence in the ability of humans to build and operate nuclear power plants safely and effectively, why on earth would I be bullish on nuclear?

I learned long ago that when it comes to investing, I must separate my personal feelings from my desire to build and protect wealth.

Certainly, some folks do not draw that line, and that's fine. If you're able to invest to the tune of your principles, that's fantastic. But for me, I know my personal beliefs on nuclear power have absolutely no effect on the industry. No matter how much I huff and puff, nuclear power is not going gently into that good night. So if I see an opportunity to profit from it, I don't hesitate.

To give you a recent example, last year I picked up a few shares of a small uranium play out of Canada. It was recommended to me by my colleague Nick Hodge. Take a look at how it's done so far this year... 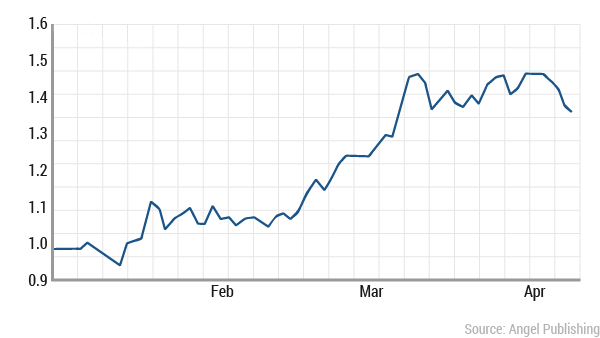 And my friends, I don't plan on exiting this little gem until it's well over $2.00 a share.

Nick actually has a handful of these small, undiscovered uranium plays. And I strongly recommend you get a piece of this action, too.

You know, it's funny, but I recently read a piece in Bloomberg where a professor from the Department of Nuclear Engineering at the University of California, Berkeley said the following...

“The cold truth is that, no matter what you do on the technological improvements side, accidents will occur — somewhere, someplace. The consequences of radiation release, contamination and evacuation of people is clear and obvious. That means governments and citizens should be prepared, not just nuclear utilities.”

If the proverbial poop hits the fan, that's it. There's no safe exit plan. There's no magical translucent dome we can use to protect ourselves.

So yes, while some publish warnings that few will ever see or just choose to wait for the next big nuclear meltdown, I'm going to go ahead and make the best of an uncomfortable situation by getting rich.

Click here to find out how you can join me.