Last Tuesday, as I'm sure you heard, Iran, the U.S., and five other world powers reached an agreement on Iran's nuclear program.

The deal provides sanctions relief to Iran's oil, gas, and export industries in return for a heavily restricted and monitored nuclear energy program. The hope is that this will prevent Iran from obtaining a nuclear weapon.

In the week since the deal was reached, there's been a flurry of opposing views on this subject, with many saying Iran is going to build a bomb and others saying the U.S. took the best option available.

Another major talking point — for us at Energy and Capital especially — is that Iran's now sanction-free oil industry will likely flood the already-oversupplied market with more crude oil.

Prices reacted in kind, with WTI crude down near $50 per barrel from $60 just a few weeks ago.

You can't blame Iran, though. I mean, the country has lost nearly $100 billion in oil and gas revenue since the strictest sanctions went into effect and an additional $500 billion in other projected revenues.

So without any doubt, oil is a huge part of this deal. But today, that's not what I'm curious about.

Instead, I want to know what this deal will do to the uranium and nuclear power market.

Now that Iran has reached an agreement, any conflicts aside, the country will begin openly building its nuclear energy program.

Iran already has one nuclear plant that provides about 2 Twh of the total electricity consumed in Iran in a given year. This is a small fraction when you consider that Iran consumes over 200 Twh per year.

However, with one plant producing and another under construction, it's only a matter of time before Iranian nuclear production increases and soaks up a consistent portion of uranium resources.

Of course, Iran already has a stockpile of uranium that's been enriched 20% (enough for purification into a weapon), but per the deal, the country will reduce enrichment to 5% for use in energy generation.

Once the country's 9,000-kilogram stockpile of enriched uranium is drained down to 300 kilograms (as is required by the deal), Iran will need to consistently build its supply through purchases from miners, most likely in Kazakhstan, Uzbekistan, and other nearby producers.

Depending on how big Iran's program gets, the world (investors included) could be in for a long-term bull market for uranium, as governments keen on reducing carbon emissions look for cleaner power.

One such government is China, where new clean energy mandates have prompted a boom for nuclear power:

According to the Energy Information Administration, China plans to increase its nuclear power capacity from 23GW to 58GW by 2020 and have an additional 30GW under construction by that date.

Now, over four years removed from the Fukushima disaster in Japan, much of the rest of the world plans to increase nuclear power by 2020 as well. As you can see on the chart above, the U.S., France, South Korea, and Russia all plan to grow nuclear energy capacity.

Japan is the only major nuclear generator to keep its capacity as is over the next five years, while China (if everything goes according to its plan) will quickly rise to third in nuclear capacity worldwide.

Couple these developments with a long-term deal between Iran and the West and an upcoming climate summit (where nuclear will likely be a part of the conversation), and you can see the formation of a long-term uranium bull market.

The beauty of a potential uranium bull market is that the fuel has been beaten down since the Fukushima disaster in 2011... 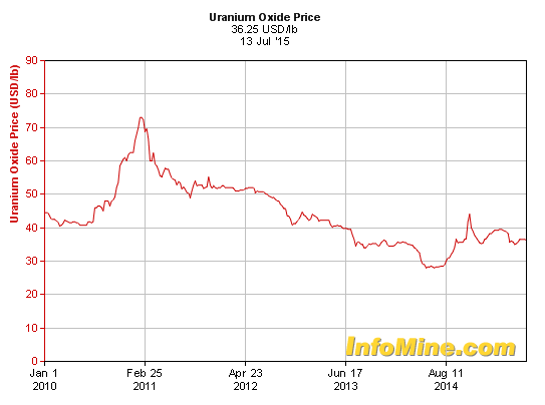 Uranium prices are down nearly $40 since 2011 and, despite a recent spike in price, have remained low for years.

This is a good thing, of course, because investors can buy uranium stocks now while the price is low and wait for the long-term gains to be provided by world powers including China, the U.S., and now Iran.

Over the last three months, uranium has stayed below its potential value even during the nuclear talks between Iran and the West: 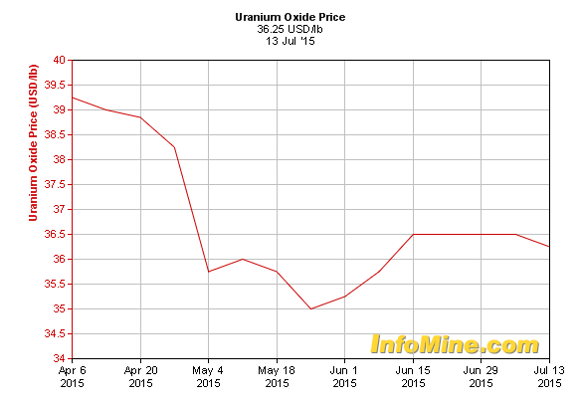 So now you have time to build a position in nuclear energy before the climate summit later this year that will broker an agreement between most of the world's countries on how to deal with rising carbon emissions.

Nuclear will be one of the answers, and prices could spike soon after.