The Bullish Outlook on Natural Gas

It's a rebound three years in the making.

Ever since natural gas prices crashed (along with everything else) in 2008, we've been anxiously waiting for the supply glut to lessen and basement prices to rise...

And if you've been following natural gas prices since then, it has been difficult to watch, to say the least: 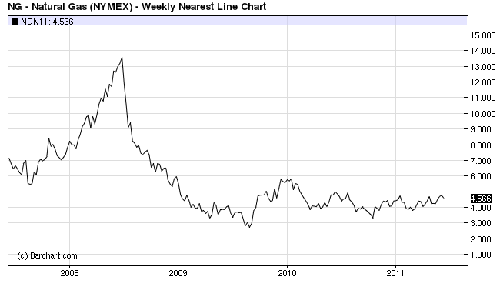 Soon, our wait will be over.

Within the next five years, U.S. natural gas producers will have an entirely new market to tap — one that would have gotten us laughed out of the room a decade earlier at the mere mention.

We'll get to that in just a minute.

First, let's take a look at why prices could double within the next 12 to 24 months.

Demand on the Rise

Although prices may have crashed hard, demand has already rebounded. During the last five years, U.S. natural gas demand has grown nearly 12%.

In other words, it's higher than ever before.

Now we already know where most of that demand is going. Breaking down the EIA numbers, about 30% of that consumption is for electric power and 27% is from industrial use.

Our natural gas production, however, is expected to jump 4.5% this year — nearly double the EIA's previous estimates. Interestingly, the production increase will happen despite more rigs drilling for oil than natural gas.

Of course, 45% of our domestic natural gas production in 2035 will be from the various shale plays across the United States.

And we're not the only ones with a bullish outlook on natural gas...

The IEA's Golden Age of Gas

The International Energy Agency (IEA) recently said natural gas will play a much bigger role in the global energy mix than first thought. The aptly titled “Are We Entering a Golden Age of Gas?” reports global demand for natural gas will rise by more than 50% within the next 25 years.

And it gets better: According to the report, natural gas' role in the overall energy mix is projected to rise from 21% to 25%, overtaking coal by 2030. 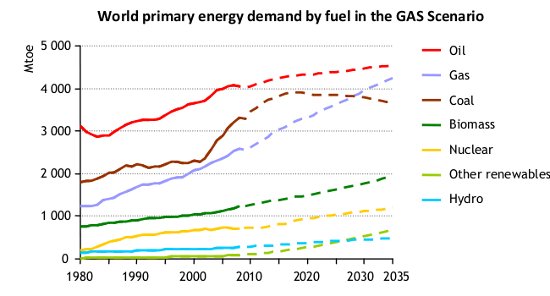 The IEA goes on to say China's demand will match that of the entire European Union by 2035. In the Middle East, natural gas consumption doubles. Even India's demand will rise four-fold in 2035, compared to 2010.

To put this demand growth into perspective, the world's annual natural gas production will have to increase by 1.8 trillion cubic meters (or approximately 63.5 Tcf) — or roughly three times the current production of Russia.

Remember that oversupply we were worried about? The IEA's report believes the gas glut will dissipate before 2015.

Investing in the Long Run

Unlike U.S. oil production — which peaked at 9.6 million barrels per day (an amount we will never reach again, no matter how optimistic we are) — our domestic natural gas production is at record levels.

We've discussed several ways to take advantage of our shale boom in the past. Just last week, my colleague Ian Cooper reiterated how easy it was. His latest investment report highlights one of those growth opportunities: a small natural gas company operating in the Marcellus play, right in the middle of the action.

ExxonMobil's recent $1.69 billion deal to buy two private companies with Marcellus acreage proves Big Oil's confidence in the shale boom. If you recall, ExxonMobil shelled out $41 billion to pick up XTO Energy in 2010. Their latest deal more than doubles their Marcellus position.

For us, there may be a better way to profit from the bullish outlook on natural gas.

A Different Way to Profit: The Future of Exporting Gas

As I said earlier, had I mentioned investing in the U.S. exporting liquefied natural gas (LNG), I would've been ridiculed mercilessly.

But don't feel too bad, because we'll have the last laugh...

About a month ago, the U.S. Department of Energy gave its approval to Cheniere Energy (AMEX: LNG) to build an LNG export plan in Louisiana, the first company to do so.

The project, which could cost more than $8 billion and take more than four years to complete, will be in a position to take full advantage of our domestic shale boom. Cheniere Energy expects to begin production in 2012 and be online by 2015.

P.S. Unfortunately, our shale boom has a dirty secret. There's a heated debate playing out in the media concerning hydraulic fracturing. Accusations of groundwater contamination are growing by the day. And yet, shale producers have no other option... Or do they?
My readers and I have found a way these shale drillers can fracture the rock. And this company is only now starting to gain a foothold in the U.S. shale plays, providing an alternative to hydraulic fracturing.