New Fed Head to Lie to Us

It is a bleak day here on Wall Street. It is cold, too. The wind blows, and the talk on the radio is of a late March snowstorm.

It seems the market is concerned with some shenanigans at Facebook (NASDAQ: FB), which has dropped more than $40.

The Cambridge Analytica scandal has done immense damage to the brand, sources across the company believe. It will now take a Herculean effort to restore public trust in Facebook's commitment to privacy and data protection, they said...

Aleksandr Kogan, a University of Cambridge professor, accessed the data of more than 50 million Facebook users simply by creating a survey filled out by 270,000 people. Facebook provided Kogan with the data of anyone who took the survey, as well as their friends' data. In a statement, Facebook said, "Kogan gained access to this information in a legitimate way and through the proper channels that governed all developers on Facebook at that time."

There is a “Delete Facebook” campaign, and it looks like government regulation may be in the cards. CEO Mark Zuckerberg hasn’t been heard from. Perhaps he put on a red sweatshirt and went into hiding.

That said, it is ticking higher and will likely break out to the upside in the next few months. If we can get above $1,390, it is off to the races. 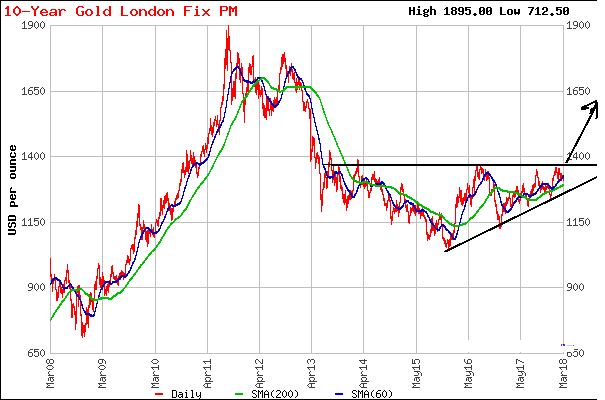 The market is down because the Federal Reserve is going to raise interest rates tomorrow.

After all the coffee has been put away and the Danishes devoured, the U.S. central bank will issue a rate decision, a policy statement, and an updated forecast on the economy.

This will happen at 2 p.m. Eastern on Wednesday. Our new Fed head will follow up with a press conference at 2:30 p.m. He will say they hiked rates a quarter percent, that they are watching the data and are concerned about inflation, and that they will raise rates if needed in June.

To put rates into perspective, here is a 62-year chart. The grey lines are recessions. 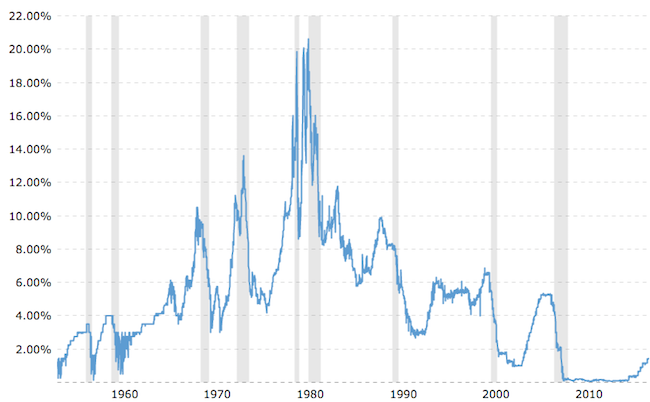 You’ll notice that the Fed hikes rates and creates recessions. Then it cuts rates! That’s because if it can’t cut rates to make money cheaper, then it can’t save us from the recession it just created.

Stocks that will underperform are utilities, consumer goods, and real estate. The winners will be gold, silver, timber, cobalt, lithium, and rhodium, as well as financial, tech, and healthcare stocks.