Congress agrees to extend the ITC and lift the oil export ban all at once.

The U.S. Congress has laid out a bill that will both extend renewable tax credits and lift the 40-year oil export ban.

These may sound like pretty disparate decisions. Supporting both clean energy and fossil fuels in one bill? What could come of this? 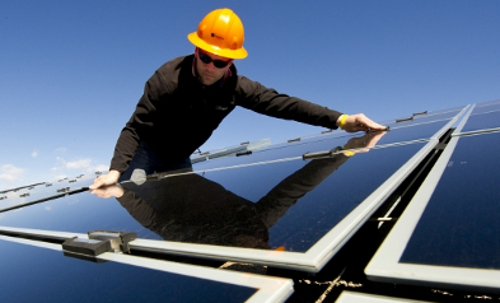 First, the most obvious benefit of this bill will be the extension of the tax credits for wind and solar installations.

Rather than setting a date for all credits to expire, Congress has set a gradual phase-out schedule.

For wind, the PTC (production tax credit) is also being extended rather than cut off, and will be gradually phased out between 2017 and 2020.

What's more, these projects now only have to begin construction, not be operational, within the target year to get the credits.

And what can that do for oil?

You see, the expansion of clean energy technology will more than likely expand to oil and gas producers. We've said it before, and we'll say it again: fossil fuels aren't going away.

It's far more likely that companies will find a way to conform to the cleaner production requirements, even if prices recover and production ramps back up.

The EIA has estimated that in the best case scenario, an oil price recovery paired with legalized crude exports could increase production by 500,000 from the current 9.4 million barrels per day.

However, analysts don't expect oil exports to have much of an effect on current production, since the price of oil is so depressed and the market is so glutted. And so, at least in the beginning, emissions levels won't be affected.

In the long-term, due to the volatility of the oil market, the rest is more difficult to estimate...

The deal may offer a grace period in which oil companies can take time to prepare for higher prices, and renewable energy companies can expand projects to offset any increase in emissions that new oil production might bring on.

For now, it will be a matter of improving the technology we have and waiting to see what the markets do in response.

To continue reading about these possibilities, simply click here to read the Vox article.