If you fueled up your car this week in the United States, you paid somewhere around $3.35 a gallon for gasoline.

Natural gas, meanwhile, sold for $3.14 per million British thermal units. When considered in terms of gallons, we're looking at around $2 a gallon of gasoline equivalent.

The natural gas production boom has been featured in the mainstream media as production continues to increase monthly...

Total marketed natural gas production set a record in 2012. The EIA predicts it will exceed that this year.

Keep in mind the shale boom that's been contributing to growing production was cranking along long before the media caught on.

With attractive low prices and the years the boom has had to gain momentum, you're probably wondering why you can't just trade your gasoline tank for a natural gas one.

Well, to be honest, you can — but it's probably going to cost you...

It's important to note that the problem that's present in the U.S. isn't universal...

In fact, while the number of natural gas vehicles in North America has been low — and stagnant — since 1991, growth in every other region (with the exception of Africa) has been robust: 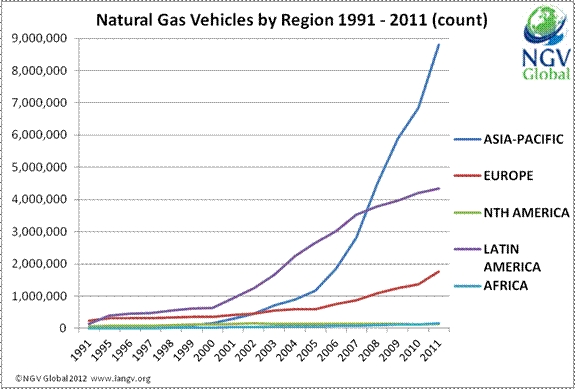 Iran leads the world's nations with the most natural gas vehicles on the road. The country has huge natural gas reserves, and recent sanctions have hurt its gasoline imports. But Iran is learning to become more self-reliant, and its natural gas vehicle market is booming.

In the U.S. natural gas vehicles and fueling infrastructure hit a wall when getting off the ground. Because without vehicles, companies won't build infrastructure... and without infrastructure, consumers won't buy vehicles.

As far as passenger vehicles go, the Honda Civic Natural Gas was actually the only all-natural gas vehicle available in 2012. This year, Ford (NYSE: F), General Motors (NYSE: GM), and Ram will each debut bi-fuel pickups, which run on both gasoline and natural gas.

There are also conversion kits that can switch cars to run off of natural gas, which will cost drivers $1,000 or more.

But then there's the fueling stations. Though they're still relatively scarce, particularly in certain parts of the country, more are popping up.

Clean Energy Fuels Corp. (NASDAQ: CLNE) may prove one of the leaders in fueling station installations. The company's America's Natural Gas Highway project is currently in progress, but by the end of the year CLNE will have installed 150 LNG fueling stations — mainly at Pilot-Flying J truck stops — on major highways across the country.

Clean Energy also has a number of CNG stations in place across the United States. And in anticipation of the New Year, the company teamed up with Honda, offering a $3,000 fuel card for its stations to anyone who bought a Civic Natural Gas before January 2.

Companies like Clean Energy and Honda are behind the first big push for natural gas vehicles, but others — particularly truck companies and companies with large fleets — will move it forward.

It isn't going to be a rapid process, but it will likely be a steady one. And natural gas production opportunities will thrive once nat gas-powered vehicles gain their fair share of the market.

Brianna Panzica for Energy and Capital

Why You Should Celebrate Apple's Sell-Off: Apple's Sell-Off is Good News
Analyst Briton Ryle takes readers back in time to explain why investors should be celebrating Apple's sell-off.

Peak Car Investment Opportunities: We Hit the Peak in 2005!
There's been an interesting shift in behaviors regarding daily work commutes that has led to some folks not even needing a car. You've heard of Peak Oil, but what about "Peak Car"?

Obama Destroys 2,900 Jobs: How to Profit from Government Foolishness
Emerging markets are rapidly increasing their use of coal, and logic would dictate the U.S. government would smooth the way for exports. But instead it's attempting to shut it down...

The Yen's Loss is Gold's Gain: Currency Wars Flare Up
The yen, U.S. dollar, and euro have returned to their three-way race to the bottom. But Japan's desperate move may signal an upward run out of gold's malaise.

Air Car Investment Opportunities: Will the French Kill the Electric Car?
The technology has been around for over 117 years, but a lot has changed. A new compressed air vehicle could be a major game-changer for this automaker.

Frack It All!: Free Natural Gas
An EIA report published many years ago stated the world would have to spend $20 trillion to meet future energy needs. It seems as though that figure will be grossly underestimated...