Everyone wants to be more efficient.

It doesn't matter who you are or which business you're in.

And nowhere is that a bigger priority today than in the energy industry.

In March, we told you technology is driving our domestic oil and gas boom.

We've known since the 1950s the Bakken held billions of barrels of oil. This wasn't some revelation industry experts had in 2008.

But the recovery of said oil didn't take place for decades...

Until the right technology (combining horizontal drilling with hydraulic fracturing) was perfected to tap this wealth of shale resources.

In just four years, the entire production process has been added to, altered and, above all, improved.

Nothing is out of bounds when it comes to new breakthroughs or shaving costs from the multi-million-dollar shale wells being drilled on U.S. soil — and often, it's the small changes that can make a huge difference...

We saw this earlier in 2012 with Encana, one of the largest North American gas producers.

A few months back, the company reported it was going to begin powering its drilling rigs with LNG rather than diesel.

For those of you keeping score, that's a few million gallons of diesel being used daily to extract oil. Even with a 20% drop in crude prices over the last three months, fueling those rigs isn't cheap.

But Encana implemented a new LNG strategy that allowed them to lower their fuel costs by 47% in the Haynesville Shale.

Of course, another added benefit to converting to nat gas is the fact that using LNG-driven rigs will emit between 20% and 30% less carbon dioxide than those running on traditional diesel.

After witnessing Encana's success in making the switch to natural gas, it was only a matter of time before we started seeing this strategy elsewhere...

EQT Corp. announced they were doing the same thing to their rigs in the Marcellus.

So we can't help but wonder how many more companies will soon follow suit during the next few years — especially considering the supply glut has all but assured a low domestic prices for natural gas.

Switching to rigs that run on LNG rather than diesel is just one example of the changes being made in the energy sector.

When I mentioned this efficiency measure to my colleague Nick Hodge, he replied with a grin and said, “You want to see growth potential?”

He didn't even wait for me to respond before he went on: “This breakthrough could eventually take our natural gas boom right out of the picture.”

If there's any sector of U.S. energy production that has room to grow, it's solar: 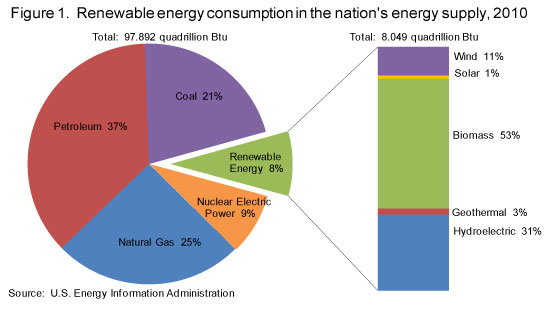 Most energy investors make the mistake of only paying attention to the larger slices of the pie above: oil, coal, and natural gas.

In doing so, they're overlooking one of the biggest investment opportunities today...

All it would take for solar to compete against the big energy players like coal and natural gas is to be more cost efficient.

Now, I'll be honest; I've always thought solar — or any other form of renewable energy, for that matter — would have a heck of a time competing with coal or natural gas...

That is, until Nick showed told me about a new development in solar technology that manages to cut costs in half while doubling output.

Imagine the potential growth for solar it if was suddenly on the same economic playing field as fossil fuels...

This could be the turning point for solar.

I recommend reading Nick's full investment report for yourself.