What No One Else Has Caught... Yet

Here’s what no one else will tell you with regards to natural gas: Buy it — or miss the historical September run.

You see, it doesn’t matter what the bears say. It’s time to buy natural gas while no one’s looking.

Just as I called the $4 bottom on natural gas on May 19, I’m calling for natural gas to rally once again…

“You’ve heard it all before: Supply is outpacing demand… Our ability to horizontally drill for shale gas has made the supply picture seem unlimited... the short-term outlook is bleak,” I said back in May.

“But those are all fine examples of herd-mentality thinking. Contrarians, like us, though, are buying hand over fist.”

And we were right. Natural gas would spike well above $5 in coming weeks.

But, as expected, the bears are coming out again as natural gas pulls back. And as a result, they might miss out on the buying opportunity of a lifetime.

This may be because they don’t want to watch the charts: 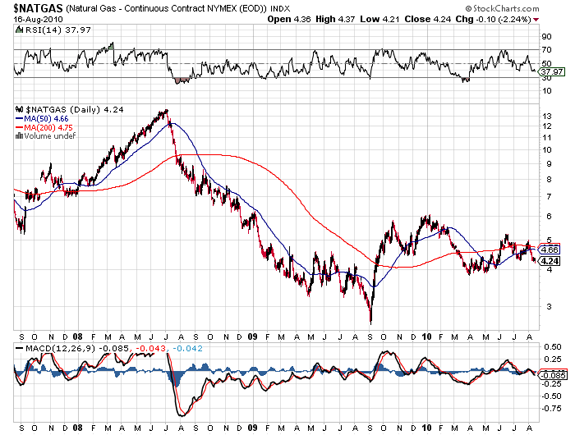 Notice that every September — even in the steep 2008 sell-off — natural gas has spiked big.

Last summer, for example, natural gas suffered. But once September rolled around, natural gas roared from $2.50 to more than $5 by January 2010.

And it will do the same thing this year.

In fact I’m buying as much natural gas as I can right now in Pure Asset Trader… and I advise you to do the same.

But how do you know when exactly to pull the trigger?

One way is to watch for MACD (moving average convergence divergence) and DMI (directional movement indicator) to crossover and agree. When they do, it's time to pull the trigger.

Let’s start with the Dow, as an example... 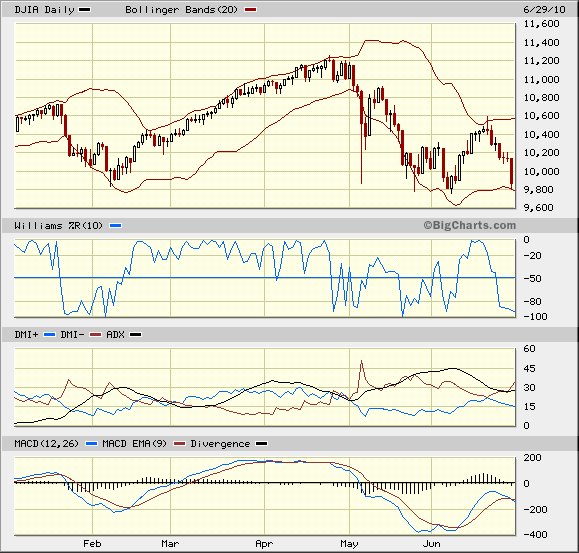 Take a look at the MACD and DMI on this chart of the Dow.

When the two agreed, we had confirmation of a big move on the way, and the market collapsed. Used alone, these two indicators — when in agreement — are powerful tools.

Here’s how we’ve used them to find natural gas stocks.

Knowing that natural gas stocks historically pop in September, we can also use MACD and DMI to determine our exact entry price. Let’s use PetroQuest (PQ) as an example here.

Notice in the chart that MACD was already displaying a bullish signal (MACD blue line was above MACD red line). We just needed DMI+ (blue line) to cross above DMI- (red line) and we had bullish confirmation for upside.

Once we got that in late August/early September in 2009, we bought and watched the stock pop from $4 lows to more than $8 in less than two months.

It can be that easy.

In the next few weeks, we'll be issuing a brand-new report that details more quick-gain investment opportunities... So keep an eye out on your inbox.

How To Invest in Natural Gas
Energy and Capital editor Chris Nelder sees an air pocket forming in future natural gas supply just like the one he anticipated in oil, suggesting that it's time to buy gas.
Natural Gas Price Outlook
Energy and Capital Editor Keith Kohl reveals to readers why a recovery in natural gas may be on the horizon.
Hydrogen Fuel Cells: The Downfall of Tesla?
Lithium has been the front-runner in the battery technology market for years, but that is all coming to an end. Elon Musk is against them, but Jeff Bezos is investing heavily in them. Hydrogen Fuel Cells will turn the battery market upside down and we've discovered the tiny company that is going to make it happen.