The Once and Future King of U.S. Energy

We cannot build the future by avenging the past... or can we?

Well, that's exactly what we're doing with our energy future right now. I know I'm not the only that sees the United States' energy dynamic shifting — and you should, too.

The good news is that if you haven't yet, then your timing couldn't be better right now... and you can thank the war on coal for your future windfall of profits from our energy landscape.

Unfortunately, investors heavily embedded in the coal industry are staring down a long, bleak road as the entire industry continues its death spiral.

You can see the brutal effects that plummeting coal prices have had on coal companies over the last few years.

Just recently, the United States' largest private coal mining company was forced to lay off 80% of its workforce. It isn't alone, either. The four largest publicly traded miners have lost more than $44 billion of market capitalization over the last five years.

Duke Energy, one of the largest utilities in the country, spent $5 billion to acquire Piedmont Natural Gas in order to secure its future supply of natural gas.

Oh, how the mighty have fallen — and fast!

Or perhaps it's just common sense.

Either way, the transition away from coal is happening, and you have two options: take advantage of it or miss one invaluable buying opportunity in natural gas.

The Death of Coal

Don't jump too far ahead, because no matter how much the EPA would like to believe it, the coal industry isn't dead... yet.

It's the third-largest source of energy, accounting for 16% of the United States' total energy consumption.

Break the number down further, and you can see coal's weakness... 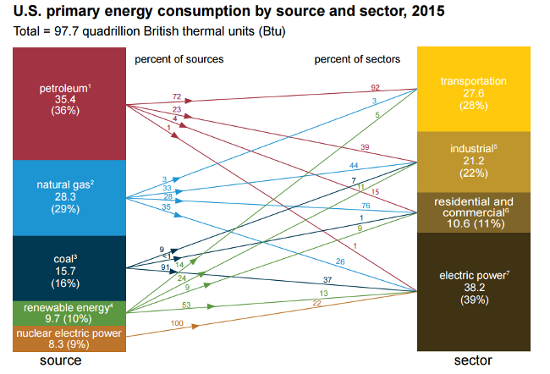 Last year, an overwhelming 91% of U.S. coal power was used in the electric power sector.

That's the Achilles heel of the coal industry.

You see, the coal industry once generated more than half of all power generation in the United States. Take a second look at the chart above and you can see that share has fallen to a little more than one-third of the power sector.

Feel free to lay the blame for the death of coal on any one of several catalysts: pressure from environmentalists, public sentiment on the industry turning increasingly ugly, or even the EPA's all-out war against coal producers via its clean power plan.

Sure, each has its own contribution, but there's one thing that has done more to kill coal than anything else...

Natural Gas Price Forecast for 2017: The Bulls are Running

There aren't many sure bets you can make in the market, but higher natural gas prices in 2017 may be the best. 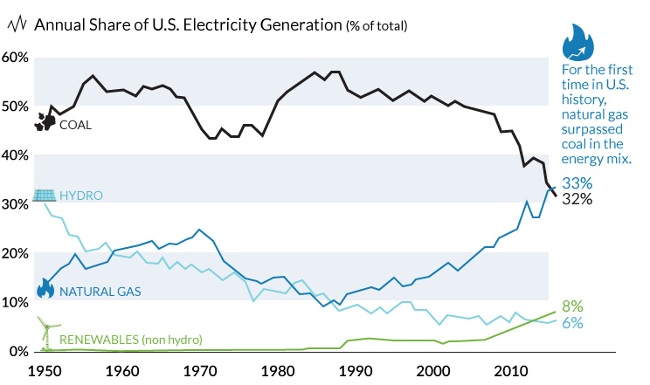 That's no easy feat, mind you. The U.S. has been in love with King Coal for more than a century.

Unfortunately for those environmentalists who dream of a world powered by solar, wind, and happy thoughts, it was actually hydraulic fracturing that put the final nail in coal's coffin.

Specifically, it was tapping into the United States' vast shale gas resources that led to the supply glut, which in turn pushed natural gas prices low enough to compete against coal.

In fact, plays like the Marcellus shale almost singlehandedly drove gas prices lower, even making up for long-running declines in our conventional production: 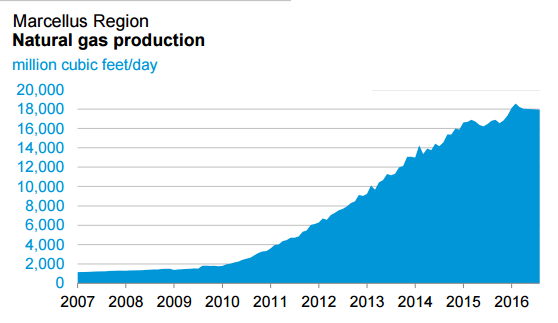 And after years of waiting, our patience is paying off in spades.

So why is now a great time to get back into natural gas? Well, if truth be told, the best time would've been a few months ago.

If you missed it, don't worry... you weren't the only one. Few investors caught wind of it, but those who did were rewarded for their bullishness.

More important, however, is that next year is shaping up to be a strong comeback year for natural gas.

The EIA expects spot prices at the Henry Hub to average $3.04 per MMBtu in 2017, or approximately 25% higher compared to this year.

In fact, natural gas is going to steal even more of coal's share in the electric power sector this year — roughly 4.9% in 2016, according to the EIA's Short-Term Energy Outlook.

This is just the tip of the iceberg, too.

On Friday, we're going take an even deeper look into why natural gas is setting itself up for even more long-term gains.