Marcellus Stocks With a Kick

I'll confess I get a twinge of jealousy whenever one of my colleagues returns from some research junket. They never fail to come back with stories I couldn't even dream up...

But as much as I love hearing the wild antics of their journeys, I don't have to travel halfway across the globe to find the next round of energy profits. It's staring us right in the face.

And believe it or not, we can break it down to a single picture: 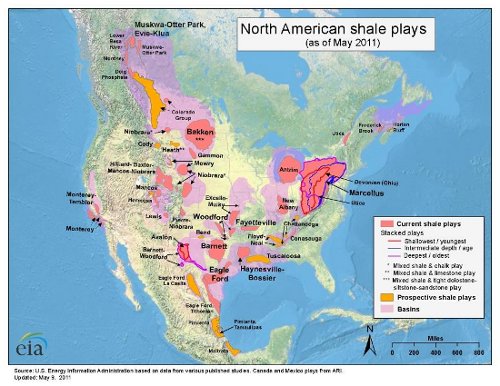 Of course, it would be entirely impossible for our natural gas investments to pay off without a little help from certain technologies, namely hydraulic fracturing.

We're also painstakingly aware of how scrutinized the entire process has become in the mainstream media, which opens a tremendous window of opportunity for investors; the more information that's distorted for public scrutiny, the more lucrative the returns become.

We've been waiting for the Shale Gas Subcommittee's report for a while, and they recently released the 90-day interim report on the environmental impact of shale gas production.

As we expected, the report highlighted the importance of these shale oil and gas basins to our future energy production. Make no mistake, they will play a critical role...

The United States already depends on natural gas for more than one-quarter of its energy demand, and that share of our energy mix is increasing without fail. By 2035, approximately half of our domestic gas production will come from shale wells.

The four-fold increase in our natural gas production, thanks to shale gas, has completely changed the situation. Not only are we now self-sufficient when it comes to natural gas, but we've talked in the past how it's dramatically increased exports.

During the last decade, our exports of natural gas have increased 367%!

And when I said that it was happening in our own backyard, I wasn't joking...

You can see below how Pennsylvania (the Marcellus has been center stage for the hydraulic fracturing debate) has benefited from the emergence of shale gas:

The first Marcellus wells in the state were drilled in 2004. A lot has changed since that time...

During the first half of 2011, roughly 1,600 Marcellus wells in Pennsylvania pumped out more than 430 billion cubic feet of natural gas — a 60% increase from the same period a year earlier.

The play is attracting billions of dollars in developing exploration and production. And this is only the tip of the iceberg.

Getting back to the report, its first set of recommendations was exactly what we were predicting. Ban hydraulic fracturing? Not a chance.

The oil and gas resources from those shale basins pictured above are simply too vital to our growing energy demand. Mark my words: Going forward, we'll start to see more disclosure, more public information, and more regulations put in place (not that more regulations and disclosure are bad things, mind you) — and by that time, we'll already be ahead of the investment herd.

We know it's easier to find the investment pitfalls in natural gas. But it's not all doom and gloom for the nat gas story; it's just more challenging to convince investors that the natural gas rebound is on its way.

Whenever I mention one of my favorite natural gas stocks, Range Resources, this task becomes easier...

Range has been in the Marcellus from the beginning, and it hasn't disappointed. According to the company's latest report, production grew 8% last quarter and is ahead of its year-over-year projections.

Even despite the harsh market volatility recently, Range has performed admirably, avoiding the steep declines that have plagued other energy plays: 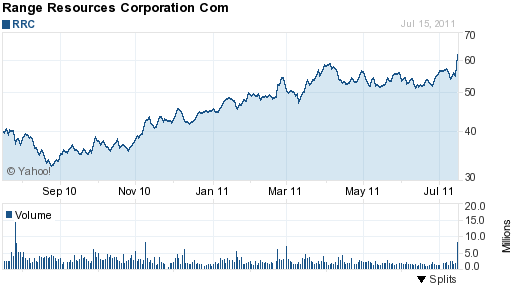 In the wake of the BHP-Petrohawk deal, don't be surprised to see the bigger energy players salivating over Range Resources...

Drawing that kind of attention is the very least we can expect, considering Range has one of the best acreage positions in the Marcellus.

Canada's First Oil War Erupts
Canada has become one of the very few countries left with a strong outlook for oil production. Not only is their oil production secure, but you don't need a map and your fourth grade geography teacher to tell you it's much less volatile than Saudi crude... Keith Kohl tells readers where the smart money is being played in the Canadian oil sands.
Preparing for the 2012 Natural Gas Rebound
Editor Keith Kohl explains why investors are preparing for a natural gas rebound in 2012.
The Safest Oil Profits in Today's Market
The scary secret behind U.S. oil production... and how investors can find safe oil profits in today's market.
The Best Time to Buy Natural Gas
Energy and Capital's Keith Kohl shows readers why now is the best time to buy natural gas.
Hydrogen Fuel Cells: The Downfall of Tesla?
Lithium has been the front-runner in the battery technology market for years, but that is all coming to an end. Elon Musk is against them, but Jeff Bezos is investing heavily in them. Hydrogen Fuel Cells will turn the battery market upside down and we've discovered the tiny company that is going to make it happen.