How to Take Advantage

Later this year, an important event will take a place that could have far-reaching implications for everyone on Earth.

From November 30th through December 11th, 2015, decisions will be made that could alter how you heat and cool your home, get to work every day, and keep the lights from going out.

On these dates, the United Nations will hold its COP21 Paris Summit, the objective of which is to prompt every nation to agree to legally binding carbon emissions standards.

Emissions standards are designed to keep carbon dioxide out of the atmosphere, and by establishing them, the countries leading the conference hope to prevent global warming from accelerating past 2 degrees Celsius — a key threshold to prevent existential danger, according to most scientists.

Whether you agree or disagree with the science of global warming and climate change, this summit will happen, and if the attendees agree on legally binding regulations, everyone in the world will feel the effects.

In order for the world to lower carbon emissions below dangerous levels, drastic changes are needed. For example, most of the world's coal production will need to decline and eventually stop.

Also, automakers will need to develop more efficient gasoline-burning vehicles, and oil and gas producers must capture all of the flare gas released into the atmosphere.

And that's just the beginning.

As you can tell, there will be winners and losers based on the agreements reached — whatever those may be — in Paris this winter. Your investments can and should be properly lined up to take advantage.

Coal is the worst and also generates a lot of smog, which can cause health problems, while oil and natural gas emit carbon to a lesser extent than coal.

The thing is, the world generates more than 40% of its electricity from coal, so any agreement this winter will, by necessity, end coal's reign as top power producer. Many environmentalists believe coal will be replaced by solar and wind energy — and this is true to an extent.

It's not a stretch to believe that solar and wind will dominate the grid eventually. But in the time between then and now, you'll see natural gas and nuclear take over as major power suppliers.

Although nuclear has many detractors, it is the most efficient in terms of energy production, reliability, and atmospheric cleanliness.

Of course, since most people hate nuclear energy, the transition from coal to renewables will crown natural gas as the world's main power supply for at least a few decades.

We've seen this play out with recent EPA regulations designed to slow down coal development in favor of natural gas, which the U.S. has in abundance. 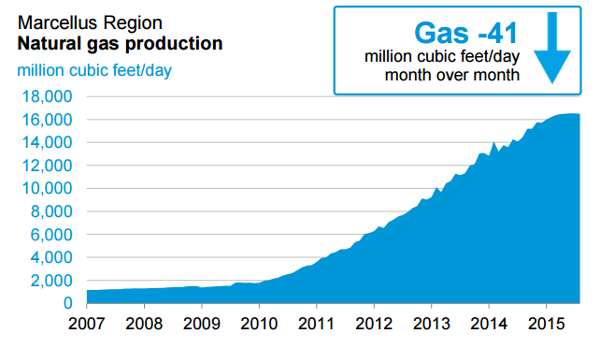 The chart above shows the most recent figures for natural gas production in the Marcellus shale. Drillers in the formation crank out 16 billion cubic feet of natural gas each day.

And this is just one of the shale gas-producing formations in the U.S. (the largest by number). In total, the United States produces 45 billion cubic feet per day. All of this comes from shale formations and is extracted via hydraulic fracturing and horizontal drilling.

The U.S. leads the world by leaps and bounds in shale gas production. In order for the world to curb its addiction to coal, this will have to change, or U.S. gas prices will skyrocket.

As time trudges forward, the latter scenario looks all the more likely...

The Rest of the World Can't Cut it

You'd think the United States was the only place with shale resources based on the numbers I just showed you, but this is simply untrue.

The map below shows the world's shale resources: 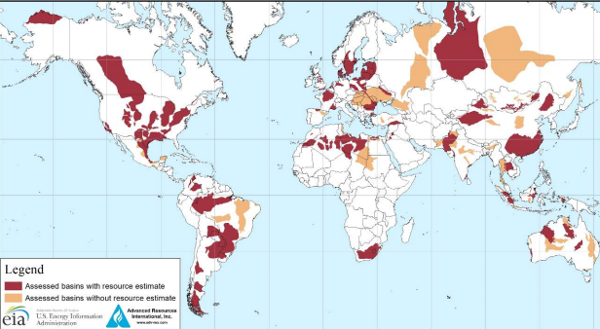 As you can see, practically all continents have shale gas resources. It's just that the United States alone has been able to efficiently tap into them. China, a country with similar recoverable reserves as the U.S., has had problems fracking its shale.

Most of the drillers trying to tap into Chinese shale cite poor geological conditions as an excuse for underperformance. Until China solves its geological challenges, the U.S. will provide the world with its energy.

Argentina, also placed above significant reserves, has been unable to develop its shale gas industry as the country tussles with default concerns.

Indeed, if the summit in Paris yields a deal (it probably will), then the role of natural gas will grow quickly throughout the world. This growth will boost North American prices by a great deal... 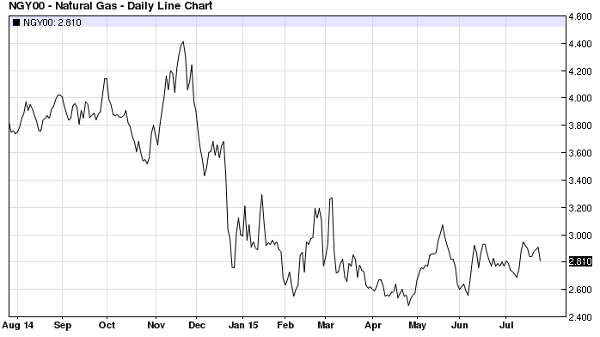 As you can see, gas has been beaten down because of the glut in the U.S. However, with new avenues for demand to increase (LNG exports), American shale producers will have more flexibility and will see a greater draw on reserves.

Prices will never be this low again, so now is the best time to invest in gas producers, midstream companies, and downstream players.

The only way prices will drop further is if China floods the market (it hasn't been able to) or if renewable energy sees a rapid, exponential boost worldwide (this is unlikely for now).

That means U.S. natural gas is one of the best energy investments you can make before the Paris Summit changes world energy consumption... forever.