"I think there's a reasonable chance we will fill up the storage this year."

That's what Joe Averett said about natural gas storage in Texas and Louisiana this week.

He says the industry's ability to extract shale gas has led to such a rapid surge in production that the market is having difficulty absorbing it all.

And yet, the drillers can't stop drilling.

Many of the contracts they signed will expire if they don't drill.

"They're still drilling wells just to hold the lease, and them having to do that, that's continued the excess production," Joe says.

People like us who pay electric bills are loving it.

If you burn natural gas for heat, hot water, or cooking... I know you're loving it, too.

But drillers aren't loving it so much.

Chesapeake Energy (NYSE: CHK) and Encana (NYSE: ECA), for example, are down over 40% in the past year. 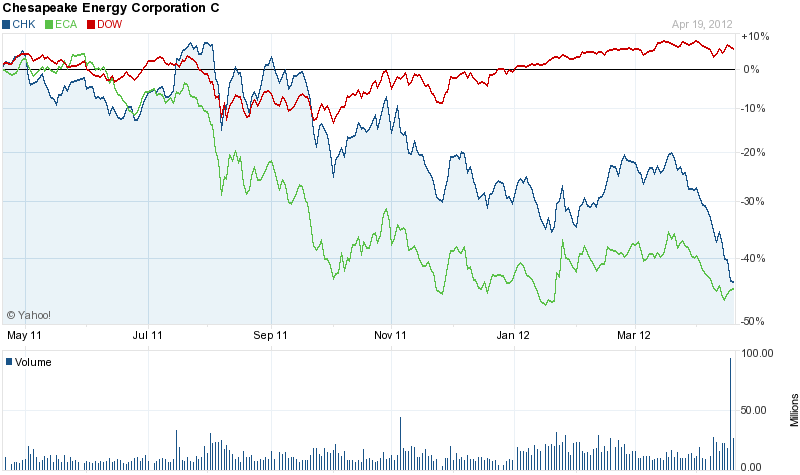 And like I said, they have to continue to drill in order to hold their leases, even as storage reaches capacity.

These guys would have to drill even if the price of natural gas goes to zero, which it may. If production continues at current rates, peak storage capacity of 4.1 tcf will be reached by October.

The only way to make money from natural gas drillers right now is to short them.

That is the question you need to be asking, because the answer will lead you to natural gas profits.

The $10 billion facility will be built in Cameron, Louisiana and has already lined up customers from the UK, Spain, India, and South Korea.

What's more, almost every new electric plant in the works burns natural gas in some way, whether as a primary fuel or, in the case of solar, a back-up fuel.

And there's also a plan to convert the nation's trucking and fleet vehicles to run on natural gas, which would help eat up excess supply.

So there is plenty of money to be made. Exporters, shippers, engine manufacturers, and infrastructure plays are all on the table, and some are already starting to move.

We know the energy market around here.

And with the focus of the natural gas market shifting so quickly, we've just released a brand new report on how to play it.

It explains in more detail why you should stay away from explorers and drillers, and focus on the “picks and shovels” of the industry.

You can have it for free, right here.