And that's because, for a long time, the only way to transport natural gas was via pipelines. You couldn't just load up a tanker with natural gas and ship it overseas.

Of course, pipelines come with their own limitations. You can probably guess why a regional energy market might involve some nasty repercussions. (Russia is a perfect example: If you didn't like the price, Putin shut off your gas.)

Then liquefied natural gas came along and changed everything.

The first U.S. patent to handle and ship LNG was issued in 1914.

But until 2008, our interest has always been in importing LNG.

After natural gas prices collapsed four years ago, the flood of cheap natural gas has turned the tables for the North American LNG trade — and today everyone has just one customer in mind...

So far, only a select group of investors has been rewarded for their U.S. LNG plays.

If you had the foresight to pick up Cheniere Energy ten years ago, you'd be sitting on a mountain of cash right now.

Compared to the major natural producers — like ExxonMobil — well, there really is no comparison: 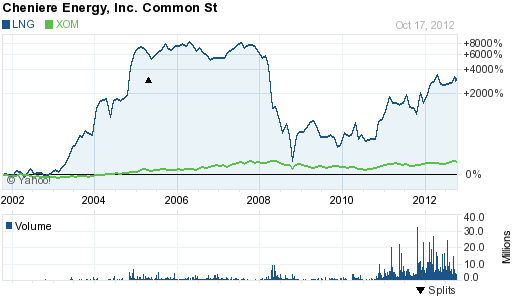 But let's assume for a moment you weren't part of that fortunate group of investors.

Seeing these types of returns again are slim. Plus, before you take the investment plunge, you might want to consider a few things...

Here in the United States, we love cheap energy — and it's been that way since the early days of our oil industry.

In the last few years (really, since 2008), we've quickly come to realize that our next source of cheap energy is in natural gas.

Don't expect Americans to give up that luxury any time soon by shipping it overseas...

When you add politics to the mix, you can expect a horde of lobbyists from the U.S. manufacturing sector to stir up a frenzied opposition to shipping our domestic energy sources to other countries, mainly in Europe.

If there's one thing we can count on, it's that governmental red tape will bog everything down.

The reality is the U.S. will never become a major LNG exporter to Asia. Distance is the key factor here — our LNG terminals simply aren't geographically positioned to take advantage of the high-priced Asian LNG markets.

(Remember, only one LNG-exporting project has been approved so far in the U.S. — and that's Cheniere's Sabine Pass terminal in Louisiana, expected to ship only 16 million tons of LNG per year.)

Just because the United States won't be a major player in the Asian LNG market doesn't mean all is lost...

Many people forget about the opportunity developing just north of us. For decades, Canadian natural gas producers have been at a huge disadvantage, and that's because they've only had one customer on the books: Uncle Sam.

From the moment our shale gas boom took off after 2008, the Canadians have suffered the most.

As I said earlier, LNG changed everything.

Canada has a much more direct route to supply China, Japan, and India when it comes to exporting natural gas. And Canada will be exporting LNG long before the first shipments leave the Sabine Pass terminal...

We certainly won't see the same political quagmire there — and some of the major U.S. players know it.

That's why it shouldn't come as a surprise that ExxonMobil spent nearly $3 billion in the Duvernay and Montney Shale formations by acquiring Celtic Exploration.

But as usual, they're late to the party.

A select few Canadian companies have beaten them to the punch, positioning themselves to control every aspect of the country's LNG exports, from production to pipeline.

It's all bundled in a $2 trillion pact to give China a cheap, secure supply of natural gas.

Keith Kohl for Energy and Capital

P.S. Energy and Capital's own Nick Hodge will be a featured speaker at this year's New Orleans Investment Conference next week. He'll answer questions on the Energy Panel — along with Rick Rule — and he'll also be giving a private 40-minute presentation on investing. Click here to learn more.