Holding Out for Production... or Holding On?

Whenever I have the chance to speak with natural gas companies, the story is always the same.

I'm told time and again that they're playing the waiting game.

For starters, the entire North American natural gas market has been anxiously waiting for a demand recovery.

I can't say I blame them, either.

If you've been keeping up with the EIA's weekly reports, you know that working gas storage has been riding above the five-year average.

You can see it for yourself here: 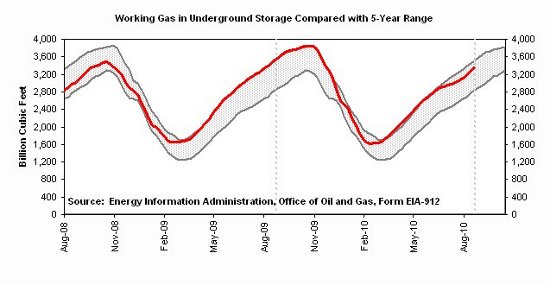 So it makes sense to hold back production, doesn't it?

After all, throwing even more production into the mix certainly won't fix the supply glut...

On the contrary, it would force natural gas prices even lower.

I think we can all agree that natural gas prices have been beaten down enough since peaking in 2008.

It's a painful chart to look at: 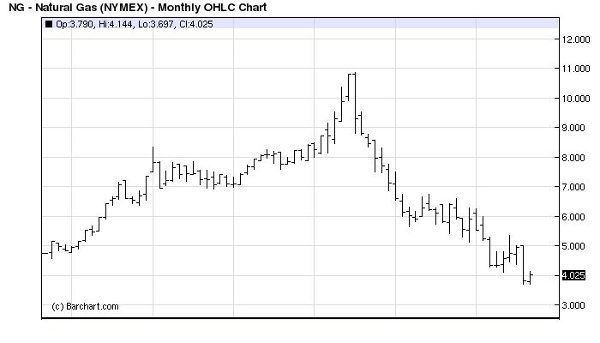 It's about time for a comeback.

This time will be a little different, however — particularly for our neighbors to the north...

Before we get too far into Canada's upcoming natural gas crisis, we can't help but notice the interest that other countries are taking in developing the region's shale gas reserves.

When it comes to unconventional natural gas, I know that the U.S. shale development always makes the front page.

But that's going to change.

The company announced it's begun drilling exploratory wells in West Bengal. With a little help from Schlumberger, the RNSG-1 well will be drilled to a depth of 2,000 meters to evaluate the resource potential.

We've been expecting this activity for awhile now — especially since shale gas accounts for nearly 20% of U.S. natural gas production.

ONGC should be releasing results by the end of next month.

Some of you might remember China getting into the shale boom last year, when PetroChina signed an agreement with Royal Dutch Shell to develop shale gas resources in China's Sichuan province...

Today, I want to bring the subject a little closer to home.

The last time we talked about the upcoming peak natural gas crisis in Canada, it was easy to see how Canadian gas production was headed for trouble.

The situation has intensified, and is in even more jeopardy now.

I'm not sure that most people truly understand how important natural gas will be to Canada. It heats 40% of the nation's homes and provides 8% of its electricity.

Believe me, dear reader, the last place you want to be caught without heat is in the middle of a Canadian winter...

Last January, I remember talking to a good friend of mine who lives just north of Calgary. He had stories about losing heat and power in temperatures well below freezing that made me shiver on the other end of our phone connection.

It made Baltimore's winters sound tropical.

Natural gas also generates approximately $47 billion in export revenue for Canada. The country is the third largest natural gas producer in the world.

The problem lies in the fact that Canadian gas producers are unable to keep production levels high for much longer.

In 2002, Canada's marketable natural gas production was about 17.3 Bcf/d. That year, a little more than 10,000 well completions were reported in the Western Canadian Sedimentary Basin (WCSB).

(In case you were wondering why the WCSB data is used, it's because the WCSB holds the vast majority of Canada's natural resources. It contains roughly 143 trillion cubic feet of marketable natural gas.)

According to Canada's National Energy Board NEB, 90% of the country's natural gas is categorized as conventional. In a recent report, the NEB explains that drilling activity will increase; yet marketable production will continue to decline.

This year, marketable gas production in Canada is projected to be a little more than 12 Bcf/d. That's a 29% decline since 2005.

Are you ready to face the reality of the situation? It isn't pretty...

It's clear that conventional natural gas production in Canada is not sustainable.

And that is one change you can bank on.

If you're investing in natural gas — whether it's a small-cap driller with a good chunk of land, or an infrastructure play laying down the pipeline — you're in it for the long haul.

If you're not, then I don't suggest quitting your day job.

Let's be realistic here. Natural gas prices haven't had much excitement this year...

With glut of supply and oil drilling offering more profits for companies (more attractive oil prices will curb the increase of natural gas drilling activity), analysts are calling a new bottom every month.

And while most investors are still too hesitant to make a move, this could be a perfect entry point — especially if you're as bullish on natural gas as we are.

If you're looking, the right plays are there.

With conventional production in a free-fall, areas like the Horn River play in British Columbia are heating up. The proof is in the numbers. Marketable gas production, which has declined everywhere else, actually increased 8% since 2002.

It's not an earth-shattering record by any means, but you can see the trend.