I didn’t buy my first stock when I was 11 like Warren Buffett did.

The world was locked in a fierce war. British engineers were testing different schemes to build oil pipelines beneath the English Channel in order to help support the inevitable invasion of Normandy.

And, of course, Bambi opened to theaters across the United States.

Do you know what Buffett’s first stock was?

It’s true... the Oracle of Omaha’s first stock was an oil service company named Cities Service. He picked up shares for a cool $38 apiece.

He also learned a very important lesson on his first trade that every single investor on the planet learns eventually — including us.

It’s the most important, unspoken rule that is overlooked more than any other.

And I want you to learn it today...

I’m going to ask you to do something today that’s going to make you uncomfortable.

It will be difficult to do at first, and some of you may refuse. It may not even make sense for a few of you, but I promise it means the difference between losing your shirt on a stock and lining your pockets with cold, hard cash.

What I want you to do is push aside your emotions right now.

Even Warren Buffett wasn’t able to do it back during his first trade, and he’s regretted it ever since.

You see, Buffett’s first trade didn’t exactly play out like he expected. In fact, his position lost roughly one-third of its value just weeks after he bought it.

When shares of Cities Service rose to $40 apiece, the young Buffett immediately cashed out.

Now, had he held his emotions in check, he wouldn’t have had to sit idly by as those same shares rose to more than $200.

Don’t judge him too harshly; he’s learned a few new tricks since then.

But there’s a reason we’re doing this exercise today.

Right now, several of the world’s largest billionaires are held in a state of panic.

Look, for years my fellow editors and I here at Energy and Capital have been calling the EV revolution what it is: the single greatest investment opportunity of this generation.

The rapid adoption of EVs by the world’s largest automakers should be proof enough.

How many companies have come out with sweeping changes to their vehicle lines within just the last few months?

What does Volkswagen know that we don’t? What would possibly scare them enough that they would announce plans to build 3 million electric cars by 2025?

Maybe they don’t want to miss the party that Tesla is throwing? Or perhaps they see the writing on the wall for the combustible engine.

Personally, I don’t think it matters at this point.

So why do we need to remain emotionless throughout this transition?

Because of Elon Musk’s blood metal...

It didn’t take very long for Volkswagen to learn the true downsides buried deep in this EV revolution.

In fact, VW has found itself in the thick of a supply war.

Look, you can probably guess by now that the single most critical ingredient to an electric vehicle is its battery.

Every single battery requires about 10 kg. of cobalt.

This is what happened later that year: 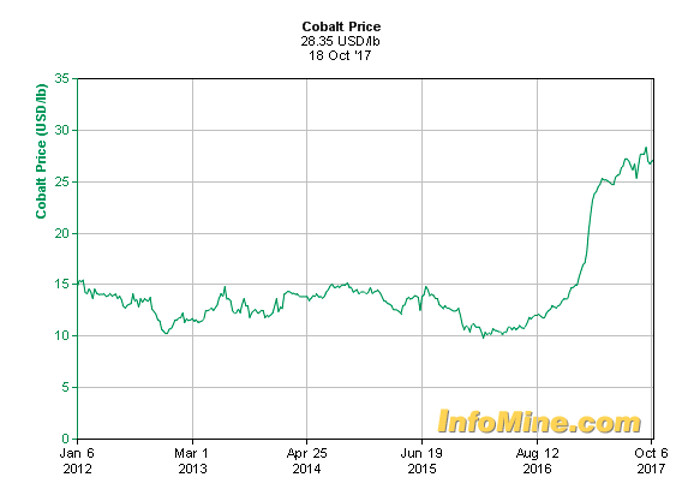 When 66% of the global supply of your most important material comes from the Democratic Republic of the Congo (DRC), you tend to panic.

Don’t think I’m only picking on Volkswagen... the bitter pill of reality here is that anyone with a hand in the EV revolution will have to deal with this issue.

Tesla is in even deeper waters, too.

Whether it was intentional or just an oversight, Tesla announced from the very beginning that it would source its materials for the Gigafactory 1 through local sources.

That’s going to be a serious issue now that Musk (and everyone else, for that matter) is desperately shopping around for conflict-free cobalt.

And as always, invest accordingly.

P.S. Right now, I'm putting the finishing touches on my newest report on the commodity that has Buffett and Musk going toe to toe... and how it's a win-win for investors like you no matter who comes out on top. On Tuesday, I'll reveal the whole thing. Keep an eye on your inbox.