Misconceptions Behind Our Shale Boom

We've all heard the one-liners about energy independence — mostly on the campaign trail of some political windbag who's praying potential voters don't call him out.

These stump speeches all begin with the same idea...

We have three times more oil beneath U.S. soil than the proven reserves of Saudi Arabia.

They're talking about the nearly two trillion barrels of oil that's ours for the taking.

Then they mention the fact that a single U.S. shale formation could be producing five million barrels per day and that this same shale resource could satiate our oil addiction for a hundred years.

Those claims can be dangerous, because that "shale" buzzword is misleading...

For uninformed investors, "oil shale" is synonymous with the now-famous shale oil plays that sprung up in the United States in 2008 and have been booming ever since.

But there's a world of a difference between shale oil and oil shale.

Confusing the two can be deadly — especially if you have skin in the game.

Energy independence is a hot-button issue — especially during an election year.

And it's of utmost importance to be informed and clear when it comes to the rhetoric.

The claims above are based on oil shale, mostly found in the Green River Formation, which stretches across three basins in Utah, Colorado, and Wyoming. 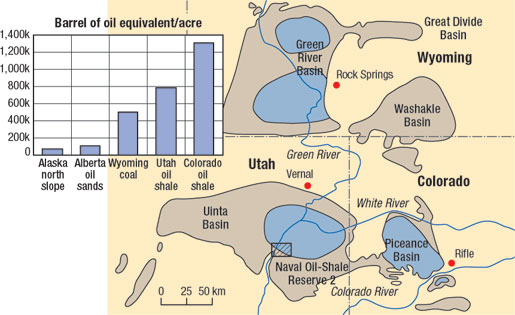 Many of my veteran readers can pinpoint the problem right off the bat: The “trillions of barrels of oil shale” found here isn't even oil.

It's not even technically shale.

In this case, mistaking one for the other is a matter of life and death for your energy portfolio. We're not talking about an area where companies can set up a rig and start drilling our way to energy independence...

Like the bituminous sands in Canada, there are only two ways to develop this resource: through a surface-mining and retorting process, or from in-situ methods.

Just in case you're wondering, only a few thousand barrels of oil have been extracted from the Green River Formation in the last century.

Luckily, there are much more profitable gambles to make when it comes to the U.S. oil sector...

You see, even though we know where much of our remaining oil supplies are located, a better investment strategy is in how we plan on pumping out those barrels.

A few months ago, I talked about why technology will be the linchpin for the U.S. oil and gas industry.

You already know how it's helped reverse a decades-long decline in our domestic output:

U.S. oil production has since rebounded back over six million barrels per day.

That surge has been due to just one thing: the combination of two existing technologies (in this case, horizontal drilling and hydraulic fracturing).

Aside from these tight oil formations, it's business as usual everywhere else.

And believe me, that's not a good thing...

Remember the recent announcement that North Dakota leapfrogged Alaska to become the second-largest producing state in the U.S.?

Both California and Alaska's crude production are at record lows.

So after witnessing the kind of boom we've enjoyed from our tight oil resources (think: the Bakken Formation) during the past five years, you can understand how incredible it would be to open up even more supplies previously believed to be unattainable.

And that's the next step for us — whether it's improving on the media-vilified hydraulic fracturing through waterless fracturing techniques, or developing a new technology that can unlock the oil we never thought we'd be able to reach.

If I'd told readers decades ago we'd be drilling 20,000 feet to tap the tight rock formations in the U.S. or going 40,052 feet under water for our future oil and gas supplies, I'd have been laughed out of a room.

Furthermore, current drilling and completing methods can only extract so much of the original resource out of the ground, which still leaves a huge chunk of crude untouched...

My colleague Jeff Siegel has been doing the research and due diligence on a small energy company with the technology that allows drillers to produce those previously unattainable barrels of oil.

His report will be out shortly. Be on the lookout for it to hit your inbox.

This could very well mark the next stage of the North American oil boom... and you'll have a front row seat for these oil profits.