These Three Mining Companies Hold Over $60 Billion in Debt

I believe that the precious and base metals markets have hit (or are very near) a bottom. And I see a cyclical upswing in metal prices starting back up later in 2016.

As a result, I'm urging all of my readers to prepare by re-incorporating mining stocks back into their portfolios now.

However, the pullback in metal prices has left the mining industry with earnings severely slashed and in massive amounts of debt.

For some mining companies, their debts could take a decade or more to pay off. For others, the outlook is much worse.

The Mining Industry Digs into Debt

While overall borrowings from the 10-largest mining companies fell slightly last year, it’s still close to an all-time high of $145 billion. At the same time, profits are expected to drop to a six-year low, according to Bloomberg estimates, hampering their ability the pay down the debt pile. 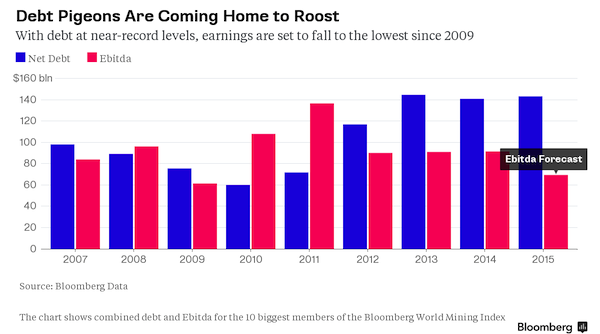 To deal with their debts, some major mining firms have announced plans to sell off or have already sold noncore assets.

Barrick Gold (NYSE: ABX), for example, just entered into an agreement to sell several of its noncore assets in Nevada to Kinross Gold (NYSE: KGC). For $720 million in cash, the deal includes Barrick's Bald Mountain and Ruby Hill mines and the company's 50% interest in the Round Mountain mine and its 70% interest in the Spring Valley project.

Many others, including BHP Billiton (NYSE: BHP), Vale (NYSE: VALE), and Yamana Gold (NYSE: AUY), have also sold off noncore assets to pay off debt and decrease spending.

Debt levels in the mining industry have gone from bad to worse.

In the past 12 months alone, the average debt-to-equity ratio in the metals mining industry has increased over 20%. According to CSIMarket.com, the average D/E ratio among miners right now is over 1.00.

And while I'm quite bullish on metals and mining stocks for 2016, there are several that could be slogged down by their accumulation of debt over the past few years.

With that in mind, here are three mining firms that are all in pretty deep debt and that you might want to avoid...

Barrick Gold is the largest gold mining company in the world. It produced over 6 million ounces of gold last year.

When gold prices are hot, Barrick gets a lot of media and investment attention. However, the drop in gold prices over the past four years has left Barrick with a giant black eye of debt.

At the beginning of 2015, Barrick was some $13 billion in debt. The company announced plans and currently says that it's on track to reduce that debt by $3 billion by the end of the year. Part of the plan included a $1.15 billion buyback of its own debt.

Despite an honorable ongoing effort to reduce its debt, Barrick is still $10 billion in the red and has one of the highest debt-to-equity ratios in the mining industry. As gold prices rise, this $10 billion debt might hold ABX back a bit.

Glencore, the world’s largest publicly traded commodities supplier, is even deeper into debt.

The company had $31 billion of net borrowings and $53 billion of gross debt at the beginning of the year — 2.4 times adjusted earnings.

After trimming its CAPEX by $800 million and selling $290 million of noncore assets this year, Glencore will still need to trim $16 billion off its debt books by the end of 2016 or face a downgrade to a junk credit rating. And that would kill its share price.

There are a number of things Glencore could do to help pay down its debts. The company could cut dividends, raise money through private equity, reduce CAPEX and other spending, sell more noncore assets, etc.

But right now, it might take a miracle for Glencore to come up with the $16 billion it needs to avoid a junk credit rating.

In 2013, Freeport McMoRan, one of the world's largest producers of gold and copper, made a big mistake.

The company increased its debt from $3.5 billion to $20 billion to invest in the oil and gas market when it bought the McMoRan Exploration Co. and Plains Exploration & Production Co. And you already know how that worked out...

Freeport said earlier this year that the company may spin off as much as 20% of its oil and gas unit into an IPO, perhaps to cut its losses.

Even if Freeport does spin off its oil and gas assets, however, the total assets could be worth up to $1.8 billion less, according to a report from Bloomberg Intelligence in September.

Freeport McMoRan is still just under $19 billion in debt and has one of the highest debt-to-equity ratios in the mining industry right now. I'm staying away from FCX for now.