Stroke of Shale Luck... or Doomed to Fail?

When it comes to energy, it's safe to say Mexico has enjoyed a run of luck in the past.

In fact, 'luck' is the only way to describe what happens when a local fisherman starts complaining about oil seepage spoiling his fishing nets... only to discover one of the world's largest oil fields.

Mexico's good fortune lasted three decades, right up to the moment they decided to place the field on nitrogen injection in 2000. Production began its steep decline only four years later.

Thankfully, they have a good neighbor to help lend a hand...

Although Pemex is only now beginning to stabilize the production decline (it's actually projected to increase slightly by 2018), the country will soon have to deal with a second crisis that's building. And luck won't save them this time.

Mexico is developing a taste for natural gas. Demand has been increasing steadily since the 1990s, yet the country's production has always managed to keep pace.

At least, it was until about eight years ago. 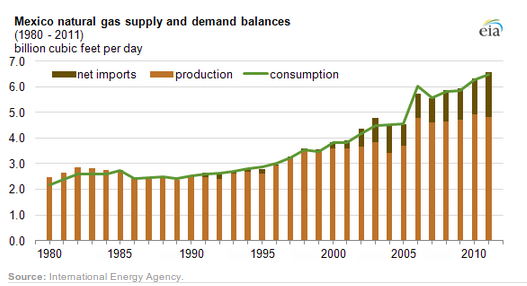 When gas demand is growing by 4% a year and production only 1.5%, they're bound to run into a problem...

As it stands now, Mexico's demand is more than six billion cubic feet per day. That may not seem like much to us, but Mexico's growing industrial demand will push it to new heights going forward.

To make up for the shortfall in supply, Mexico has resorted to something it's always done when it needs a little help. They turned to Uncle Sam. 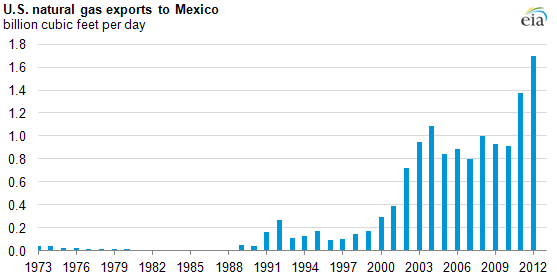 What would happen if our exports were sent elsewhere?

You should already know that this is precisely what's about to happen. In 2015, the first U.S. LNG export facility will start sending shipments abroad, and those tankers won't be headed for Mexico...

Why ship our gas overseas?

A better question is why not. The average price of shipping natural gas to Mexico via pipeline is abysmal. In 2012, the average price per thousand cubic feet was $2.94 (click chart to enlarge).

The cheap gas flowing south from the United States is having an effect on Mexico's production, all thanks to our glut of shale gas.

Pemex reported up to 1 trillion cubic feet of natural gas production is sitting idle. Adding insult to injury is the fact that the country is sitting on a wealth of shale gas — nearly as much as the United States, in fact.

When it comes to shale resources, our usual conversations revolve around China and the U.S. Rarely do we hear about the 681 trillion cubic feet of recoverable shale gas lying beneath Mexican soil. Only China, Argentina, and the U.S. can boast more.

Of course, Mexican gas production is doomed to fail because it is impossible for private companies to step in and develop natural gas projects. But that could change. For the right price, Pemex expects to drill up to two dozen shale gas wells this year.

Until the state-run oil and gas company gets a lucky break, however, there are better ways to invest in Mexico's growing gas crisis...

The EIA tipped its hat recently, showing us where future U.S. gas exports to Mexico will originate.

I have a feeling you won't be shocked to learn Texas will play a major role:

Approximately 2.1 billion cubic feet per day in planned pipeline projects for exporting gas to Mexico are expected to come online by next year.

On the production side, EOG Resources appears strong, holding the largest land position in the Eagle Ford.

We can take things a step further with the infrastructure investments that stand to gain the most from growing gas exports to Mexico, specifically pipeline stocks.

In all three cases, these plays have delivered: 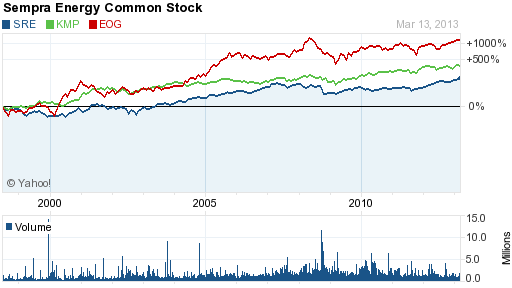 On the U.S side, there are few ways to use our supply glut to your advantage.

The trick is finding the investments that are set to take off — no matter how low natural gas prices fall. Tapping into the trillions of dollars of shale gas is the catalyst for these investments to go gangbusters for early investors.