"I am going to either renegotiate it (NAFTA) or I am going to terminate." — Donald Trump in his latest AP interview.

A trade war threat has been a part of Donald Trump's agenda since the campaign. He wants to support American workers by limiting wage competition from illegal immigrants and ensuring that U.S. exports get fair treatment in terms of tariffs. He also wants to protect American manufacturers from dumping and at the same time balance the trade deficit.

Mexican President Enrique Peña Nieto abruptly canceled a planned trip to Washington next week. The two leaders had been scheduled to discuss trade at the White House, but Peña Nieto tweeted that he wasn't coming.

Trump responded in a speech in Philadelphia. Trump said, "Unless Mexico is going to treat the United States fairly, with respect, such a meeting would be fruitless, and I want to go a different route. We have no choice."

I can't figure out if this is middle school playground taunting or leftover electioneering slogans from the 1980s. You may remember the failed presidential candidate Ross Perot saying that NAFTA will create a giant sucking sound as jobs head south.

In many ways, he was right.

It is impossible to know what an American company is anymore. Almost all S&P 500 companies are international and owned by global shareholders.

For example, the most American-produced cars in the United States in 2016 were Toyota Camry, Honda Accord, Toyota Sienna, Honda Odyssey, and Honda Pilot. Only eight cars made the list, which required 75% of parts to be made in America. None were pickups.

In 2015, Mexico set records for cars produced. It exported $74 billion worth of cars back to the United States.

Donald Trump has proposed a 20% tax on Mexican imports to pay for a border wall. He also signed an executive order to renegotiate the North American Free Trade Agreement with Mexico and Canada.

That said, it's not really cars that matter. It's agriculture.

America is the breadbasket to the world. For example, about 15% of the record 15.1 billion bushels of corn produced in the U.S. last year was exported, and Mexico recently surpassed Japan to become the top buyer. About 27%, or $2 billion worth, of corn is shipped to Mexico each year — a staple food item for that country.

Some Mexican leaders have pushed for more imports from Brazil.

On the flip side, Americans imported $5.5 billion of vegetables and $3.9 billion of fruit and nuts from Mexico. Among them were $1.8 billion of tomatoes and $1.3 billion of avocados.

The upshot of this is that U.S. grain producers and Mexican produce producers will be hurt. Furthermore, Mexican grain and U.S. fruit and vegetable growers would benefit as cross-border costs go up.

How to Play it

For the past six months in my letter Bubble and Bust Report, I've been putting together a portfolio that would protect not only against Trump's trade wars but also against the next recession.

I've been looking for companies that have benefited from the last crisis. As you can see by this chart, farmland is not aligned with either precious metals or the S&P 500. 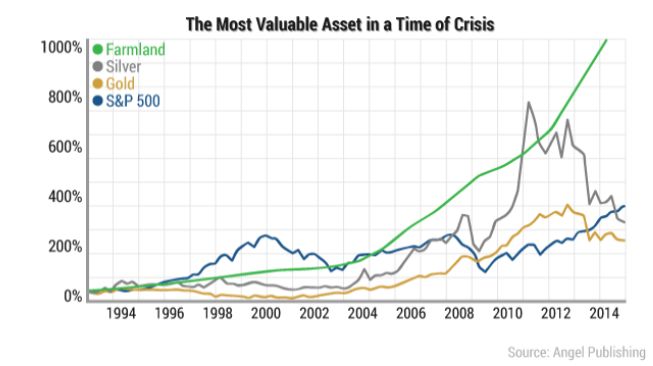 Recently, farmland in the Midwest has dropped 3%, as corn prices have fallen due to record harvests.

But farmland that produces nuts, vegetables, and fruit has gone up in value. Most of this land is in Florida and California. Ironically, between 2008 and 2015, 56% of Florida farm buyers came from Latin America.

I've found one company that is incorporated as a real estate investment trust (REIT), which means it must pay out 90% of income as dividends. It owns fruit, nut, and vegetable farms in Florida and California.

Trade wars are never good. Stocks prices are so high right now that any slowdown on the margins could send U.S. corporate earnings off a cliff and devastate equities. You need to not only protect your portfolio but put it in line with massive profits. Click here now to find out how.