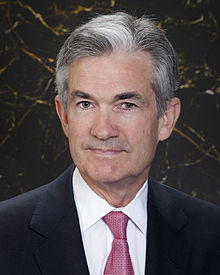 On Thursday, President Trump announced he will nominate Jerome Powell for chairman of the Federal Reserve.

It's a move that's likely to please banks and other financial institutions.

Mr. Powell has been a Fed governor since 2012 and was a former Treasury official during the Bush, Jr. administration.

But, unlike his predecessors, Powell is not an economist by training. Before joining the Treasury Department, he was into law and investment banking.

Yet with the president's nomination, Mr. Powell appears set to replace current Fed Chair Janet Yellen, whose term is up in February.

The position still requires Senate confirmation. But Republicans currently hold the majority Senate seat and can confirm Powell with no Democratic support whatsoever, if that's what it comes down to.

This is the first time in four decades that a new POTUS hasn't asked the current Fed chair to stay on board for a second term.

We shouldn't expect a lot of changes. Mr. Powell has been closely aligned with Yellen on monetary policy. But he's typically seen as “neutral” on the hawk-to-dove scale, while Yellen is generally considered a dove.

Powell has been supportive of Yellen's plan to gradually raise interest rates. He said in June, “The economy is as close to our assigned goals as it has been for many years. Risks to the forecast now seem more balanced than they have been for some time.”

This is a good sign that the Fed will continue raising interest rates throughout 2018.

Unlike Yellen, however, Mr. Powell has been a loud critic of banking regulations put in place after the 2008 financial crisis, specifically the Volcker Rule, which stops banks from using taxpayer money to take risky bets.

Last month Powell told Reuters at a summit in Washington that he was seeking a “Volcker that is significantly less burdensome.” A pairing down of the Volcker Rule is, of course, welcome news to banks and other financial institutions.

But perhaps Powell's most important and difficult task will be unwinding the Fed's $4.5 trillion in Treasuries and mortgage-backed securities it purchased during QE.

Powell voted in favor of drawing down the Fed's balance sheet, but wants to leave the door open for future asset purchases in the event of another crisis.

Back in September, the Fed announced it would finally begin drawing down its massive balance sheet. The Fed said it would unload $10 billion worth of assets a month, then gradually scale up to $50 billion a month starting in October 2018.

All in all, there are few significant Fed changes we can expect from Powell, other than perhaps changes to financial regulations, specifically the Volcker Rule.

One way to leverage the end or loosening of the Volcker Rule is through one of the many financial sector ETFs:

Banks and financial institutions have resented the Volcker Rule since it was implemented. They argue it's impossible for regulators to determine what type of trading is illegal.

The reality, however, is that Volcker simply gives banks more room for risk.

Either way, changes to the Volcker Rule could be very good for banks. Keep an eye on them.