“It's the beginning of the end for shale gas,” they say.

Unfortunately, most of them don't have much of a clue about what's going on.

What they're referring to is news that came out of Pittsburgh this week. On Tuesday, the Pittsburgh City Council adopted a new ordinance banning natural gas drilling in the city.

This marks the first time an ordinance has targeted the surging activity in the Marcellus Shale pay.

Make no mistake; the Pittsburgh community has every right to ban drilling within city limits.

Believe me, it's a good thing for them to look out for the health and well-being of their community.

But even with the Pittsburgh ban this week, the Marcellus will continue to be a hotbed of activity...

Because regardless of how the hydraulic fracturing issue is settled, companies will find a way to commercially extract the Marcellus shale.

Ever since the Barnett play thrust the shale boom into the limelight, these shale plays have been very successful for investors over the long term.

And if you think that you can't be profitable in natural gas, take a look at just four Marcellus players: 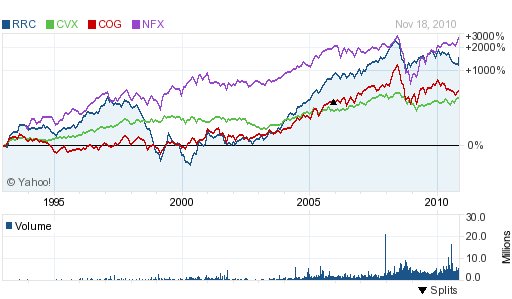 Not too shabby, considering the Marcellus has yet to receive its due attention.

And considering drillers can survive after natural gas prices bottomed this past summer, you can bet they'll flourish as the supply-demand imbalance works itself out over the next several years.

Of course, there's always more than one way to play the energy markets...

Below, you'll find some of the week's top-read investment articles to cross my desk.

The BP Fallout: Why BP's Disastrous Spill Will Lead this Drilling Bonanza
All bets are off in the wake of BP's historic screw up. And the best part for us is that BP's nightmare is fueling a massive onshore oil boom... Readers just pocketed a 600% gain from this new oil play. Keep reading to learn how they're striking oil profits next.

Greenland's $273 Billion Secret: Revealing an Arctic Fortune
Ian Cooper reports on a critical piece of Arctic real estate worth $273 billion. He'll also give you the latest scoop on the tiny mining stock that has control of it all.

Unconventional Oil and Gas: A Tale of Two Fuels
Editor Nick Hodge discusses an official peak oil proclamation by the IEA, and how to profit as new fuels take the spotlight.

Put These Stocks on the 'DO NOT BUY' List: Don't Touch This Junk
Editor Steve Christ takes a look at what passes for "security" at the nation's airports as he adds this sector to his DO NOT BUY List.

Clean Coal Reality: How I Pissed Off a Room Full of Environmentalists
Editor Jeff Siegel offers his take on cap-and-trade and clean coal.

Time to Short Treasuries Yet?: Every Ponzi Fails in Time
Analyst Adam Sharp explains to readers why, in a world where attractive investment options are lacking, shorting treasuries is looking better by the day.

Gold Prices to Rise Through 2010: World Gold Demand to Remain Strong
Analyst Luke Burgess explores the rising global demand for gold and discusses triggers and factors that could set prices on a course to $2,500 an ounce.

The Government's Stealing Your Energy: Direct & Indirect Energy Theft
Editor Nick Hodge takes a look at different ways energy is being stolen, sometimes even by the government.