Making Deals and Profits in the East African Rift

The East African Rift is a geological zone where continental plates in Eastern Africa have developed a tectonic plate boundary.

This is a part of the larger Great Rift Valley, where the African Plate is in the process of dividing into two new tectonic plates called the Somali Plate and the Nubian Plate. 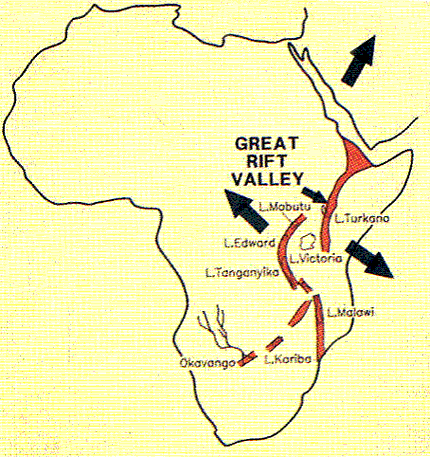 As you can tell by the map above, it runs almost the entire length of Africa.

What you don't see on the map is that the East African Rift is suspected to be one of the last great oil and natural gas deposits on earth.

Seismic tests over the past 50 years have shown that countries up the coast of East Africa have natural gas in abundance. Early data compiled by industry consultants also suggest the presence of massive offshore oil deposits.

There is now a land grab going on. Oil explorers are dropping more wells in East Africa, one of the last great frontiers in the hunt for hydrocarbons.

I first recommended Tullow Oil (London: TWL) a few years ago, after they discovered 2 billion barrels in Uganda...

It's been off to the races every since: 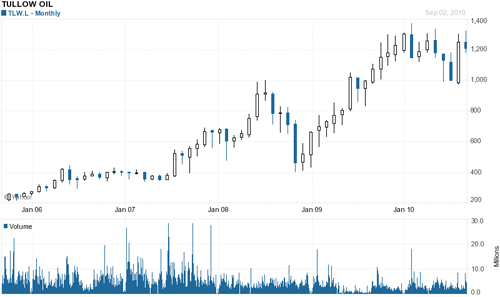 In March, Texas-based oil company Anadarko Petroleum Corp. (NYSE: APC) announced that it had found a giant reservoir of natural gas off the coast of Mozambique.

Now companies are making deals and cutting up the continent into exploration blocks.

Tullow just announced it would acquire a 50% interest in — and management of — three of Africa Oils East African exploration blocks. These include two blocks in Kenya and one exploration block in Ethiopia.

Tullow will pay $10 million USD for these new exploration blocks.

The company will also fund Africa Oil's working interest share of future joint venture expenditures in these blocks until the cap of US$23.75MM is reached.

A lot of untapped oil...

North Africa has seen 20,000 wells sunk over the past few decades. Drillers have sunk 14,000 wells in and off West Africa.

However, in East Africa, only 500 wells have been explored...

There are some oil men and geologists who think that there are 10 billion barrels of oil in Somalia. But constant political unrest in the nation means that no one is willing to spend the money to explore.

I have recommended one company in this region that is sitting on a few key blocks.