LNG Investing in the Next 10 Years

“Right now we have one of the largest LNG facilities in the world being built in Louisiana... in the next 3-4 years there are not enough gas ships in the world that can accommodate that growth.”

U.S. Coast Guard Commandant Paul Zukunft said this recently, as he commented on the dangers presented by the growing liquefied natural gas market.

Chief among these dangers, according to Zukunft, is that the new plants coming online in the U.S. — which include Sempra Energy's (NYSE: SRE) Cameron LNG plant (the one he references in the quote) and Cheniere Energy's (NYSE: LNG) Sabine Pass — won't have enough tanker ships to support production.

Because of an oversupply, shipbuilders haven't continued building LNG ships. This means the vast amount of LNG set for production in the next few years may find a bottleneck when it comes time for shipment.

Zukunft estimates that the U.S., with approved and proposed terminals, will hold 20% of the world's LNG capacity, so the fact that there aren't enough ships presents a daunting challenge for LNG producers like Cheniere.

Of course, there's still time. Cheniere's Sabine Pass Terminal won't begin shipments until the end of this year, while Sempra Energy's Cameron Plant won't ship LNG until 2018 at the earliest.

Plus, all of the other major LNG projects are many years away from completion, so it won't take too long to revitalize the fleet of tankers willing to ship the gas.

And even if there's a bottleneck on shipments, it won't matter for investors who take heed now...

LNG Demand is Going Through the Roof

Between now and 2025, demand for liquefied natural gas in Asia and Europe stands to send investments in LNG and its feedstock — natural gas — soaring.

When you take into account all of the LNG proposals on the table that, if approved, would start planning and construction by 2017, there will still be a huge shortfall.

That shortfall is projected to be somewhere around 67.6 million tons per year. 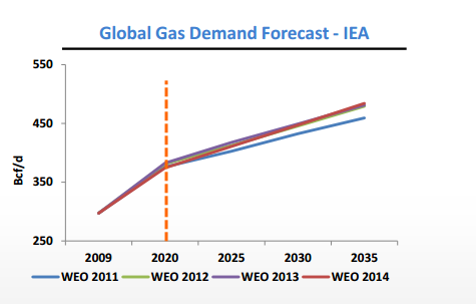 China and Japan will lead this projected demand growth as the countries transition from coal and nuclear power into cleaner, more efficient natural gas.

But with a dramatic shortfall supposedly on the books, any shortage of tankers that could slow transportation will only send prices higher for LNG when the time comes.

And when LNG prices are higher, you can bet natural gas spot prices in the U.S. will rise, too.

Consider that Cheniere Energy's planned facilities would use 6.8% of U.S. natural gas production if run at full capacity. Add in two proposed (but not approved) facilities, and the number moves closer to 10%.

Removing 10% of U.S. natural gas production would easily boost prices and investments in natural gas of all stripes.

Plus, that number only includes Cheniere's potential consumption. When you throw Sempra Energy and other companies into the mix, the drain on U.S. natural gas is inevitable.

That drain on production works to the benefit of investors who see the signs now and make the right moves.

I'm sure by now you're thinking Cheniere or Sempra Energy would be pretty good buys.

Hey, you may be right, but it's important to remember that if you were to buy now, much of the potential gains are already gone. Sure, you'd get a nice dividend once shipments started growing cash flow, but that'll take years.

Plus, these companies have to take on an extraordinary amount of debt just to build these facilities, and it will take many years to recoup the initial investment.

Instead, it's worthwhile to look at companies that will grow as U.S. LNG production shapes sectors within the natural gas industry.

Cheniere has entire pipelines devoted to its projects, for example... 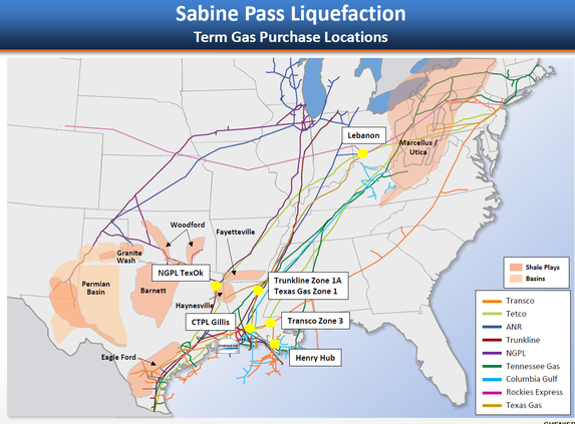 The map above shows natural gas feeders to the Sabine Pass facility in Louisiana, and the one below shows pipeline connections to Cheniere's Corpus Christi facility... 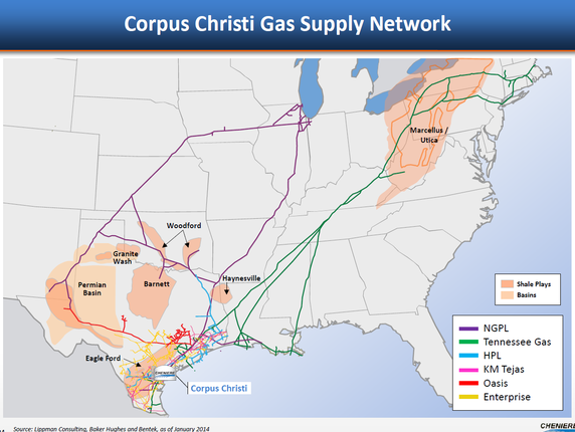 A major component of the growth in LNG production and exports is pipelines. Since the facilities on the Gulf Coast will take up more than 10% of U.S. natural gas production, the pipeline network has to be big and efficient enough to support such a drastic amount of the resource.

Although the images above look filled out, I assure you that more pipelines will be necessary.

And there are companies you can invest in right now that'll have a hand in the construction of these pipelines.

One such company pays a 10.5% dividend and takes a cut from the construction of thousands of miles of pipelines each and every year.

If you'd like to invest in LNG before it sends the market through the roof, I suggest you learn more about this company today.