Editor's Note: Rare Earth Metals (REEs), such as lithium (which has a recently updated article from Energy and Capital here...) are nothing short of crucial to the way we live. In fact without them, some of our most important modern technologies could never exist: rechargeable batteries, electric motors, photo optics, and solar cells, just to name a few.

Fix your eyes for 5 seconds on the performance of these battery stocks: 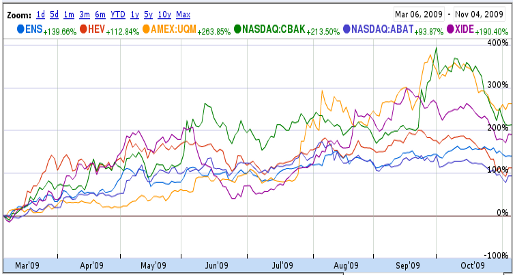 It's not even Thanksgiving yet. . . and some of these stocks have tripled since Easter.

Here's why you need to be investing in the hottest sector on the market. . .

In the past few years, the capacity of solar and wind energy has absolutely exploded. And related stocks have followed suit.

But when the sun is shining. . . and the wind is blowing. . . we can't use all the electricity these sources produce.

Batteries have emerged as the solution to this problem. Utilities from Shenzhen to Seattle are increasingly using batteries to store this excess clean power so that it can be used at times of high demand.

And it's been estimated that if, over the next decade, just 1% of energy storage demand is met, the industry will be worth at least $600 billion — most of which will end up on the balance sheets of battery technology companies.

It's now largely accepted that the future of personal transportation is electric.

The Prius and the Volt are already media whores. . . and interest is growing in the Nissan Leaf, Fisker, and Tesla.

As this happens, batteries will consistently be replacing internal combustion engines. And battery manufacturers stand to make a killing.

Surely you remember the recent mega-interest in the IPO of A123 Systems (NASDAQ: AONE), the MIT battery spin-off company. It surged nearly 40% in its first week of trading.

Smart investors see the writing on the wall.

Like it or not, the federal government is doling out billions of your tax dollars to further the development of advanced batteries.

This "free" money — in the form of grants and tax breaks — is giving a boost to the companies that manufacture those batteries.

Just take a look at some of the awards given already:

Investors have surely taken notice of this trident battery bullishness.

As you saw above, some of these stocks have surged more than 300% — just since March.

But it's not too late to climb aboard the battery bandwagon.

In fact, I've just put together a new report that details the best battery stock you can own now — and for the next five years.

It's a small Chinese outfit that already counts revolutionizing the lithium-ion battery in its list of successes.

The first time I told readers about it, the stock quickly spiked nearly 600%.

But the stock is gearing up for another run, backed this time by none other than the Oracle himself.

The company is going to quickly corner the lithium-ion battery market. . . and it's a steal at its current price.

To read all about the stock — and how you can get in before the next 600% run — click here.

P.S. This tiny $10 company is about to become largest, most profitable battery company in the world. But its future wasn't always so bright. To learn more about its rags-to-riches story. . . and how you can get in on the "riches" part, click here.