It’s really no wonder lithium is compared to oil so much these days; they’re both absolutely essential to the way our world works.

Crude oil is a major component of... well, basically everything in one way or another.

It’s the ingredient necessary to keep our electronics running, in addition to supporting a number of other industries as well.

Of course, we can’t forget that lithium is setting itself up to be a major player in fueling our transportation. Personal cars, buses, and even delivery trucks are going all electric nowadays.

And depending upon where you live, lithium could already be powering your home, too.

Is there even a question that utility-scale storage is absolutely killing it right now?

It’s actually more popular than home storage systems, much to the chagrin of companies like Tesla. Have you noticed you haven’t heard anything big about the Powerwall lately? It wasn’t a fan favorite.

Of course, that hasn’t deterred Tesla from joining the big boys in the energy storage industry...

Tesla has recently teamed up with Southern California Edison to build a 30-megawatt storage project in San Diego County.

This one will work alongside AES’s 37.5-megwatt two-facility storage project in the same area.

In fact, California has been commissioning large-scale storage projects like these for years.

These two projects were expedited after a gas leak in late 2015 left Southern California utilities scrambling to keep the power on.

The systems will store energy from nearby solar and wind installations, then distribute the power back onto the grid at peak times.

Not only will this act as coverage in case regular baseload power goes out again, but this setup will make it easier for the state to integrate more renewable infrastructure later down the road.

And this isn’t the only large-scale system Tesla has installed recently, either.

The company’s first large-scale storage system in Europe was installed in the UK earlier this year. The project was paired with a solar PV farm in Somerset and, if successful, will be the first of many such installations across the UK.

In November, Tesla announced that its 1.4-megawatt micro-grid system had been running the island of Ta’u in American Samoa, covering nearly 100% of the island’s power with one solar farm and 60 Tesla Powerpacks. 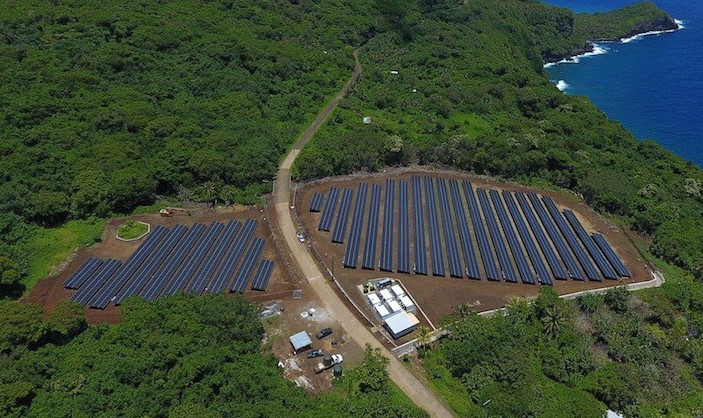 The system provides Ta’u’s residents with up to 6 megawatt-hours of energy, and at full charge, it can run for three full days without sunlight.

It goes without saying that Tesla isn’t the only one installing these systems, and the proliferation of utility-scale energy storage is achieving one of the biggest goals in the industry: bringing prices down.

Worldwide, the price of energy storage technologies like these are supposed to get 70% cheaper by 2030, according to a report published by the World Energy Council in January.

Of course, that’s not to say the market won’t be making as much money. In fact, the energy storage industry’s value is supposed to balloon from just $1 billion in 2015 to $250 billion by 2040, according to Bloomberg New Energy Finance.

Now, I wouldn’t discourage going after high-flying energy storage stocks today. Maybe not Tesla; it’s got a few other business issues to work out yet in the coming year.

But what’s really going to be making money as this trend continues is lithium stocks.

Remember how we equated lithium to oil? Well, today’s lithium producers actually have a huge advantage over oil companies in that they don’t have an OPEC-sized monkey on their back.

That means there’s no cartel restricting prices, which has left prices to climb worldwide.

To see what that’s done for the companies working with this crucial commodity, look no further than the Global X Lithium ETF, which tracks yield performance of the global lithium industry:

It’s up more than 28% for the year, and that momentum isn’t expected to stop anytime soon.

There are numerous ways to get paid while the lithium revolution rages on, but getting right to heart of the industry is far and away the most lucrative one I’ve found yet.