Let's Get Real About Smart Locks

It's Hard to Beat a Good Deadbolt

We're living in a future beyond anything General Electric or Monsanto predicted back in the 1950's. Our homes aren't white plastic Googie-style monstrosities, and we're not eating food made from sawdust and petroleum. However, a lot of the home automation foreseen by those golden-age futurists is becoming real in the "Internet of things."

Every standard household fixture will soon have a "smart" alternative that boasts a tiny CPU and some form of wireless connectivity.

There's the smart thermostat from Nest, Smart lightbulbs and fixtures from Phillips, and Smart TVs from every manufacturer on the Pacific rim. There's a smart refrigerator from Samsung that generates recipes based upon the food you're loading into it, and even coupons for the foods you need. There's even a device called Plant Link that sends you text messages when your plants need to be watered.

A handful of companies are jockeying to dominate the still-new smart deadbolt space with devices that can lock and unlock doors with smartphones.

Yesterday, a company named August announced it had raised $8 million in series A funding from a group of venture capitalists to add to the $2 million in seed funding it secured earlier this year. 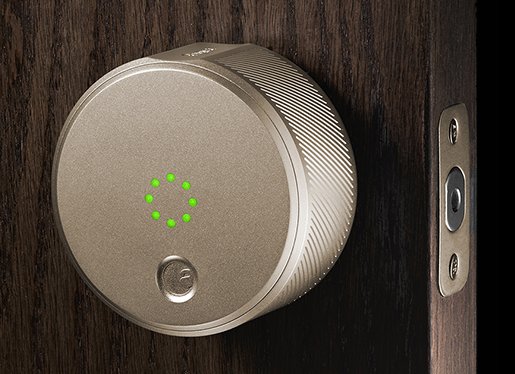 The August Smart Lock fits into the standard space where a deadbolt belongs, takes four AA batteries, and pairs with smartphones over a low-power Bluetooth connection. It learns who people are by their smartphone, and unlocks for anyone who has been approved for access.

The owner of the house can be told who is unlocking the door and when they do it. Access can be changed on the fly, and there's a function that allows the door to be unlocked even if you left your phone in the house.

Of course, the catch with August is that the unit is sitting unsecured on the outside of your front door. The unit can be opened, and the batteries can be removed. This might not affect whether the door is locked, but it could certainly become a costly annoyance if you live in an area prone to mischief (like anywhere near college students.)

August costs $199, and is available for pre-order, with shipping expected in the first quarter of calendar year 2014.

Lockitron raised more than $2 million on Kickstarter for its smartphone-powered wireless deadbolt one year ago. It is, in most respects, the same product for which August received its millions.

Like many crowdfunded products, Lockitron has had to be very open and deliberate about its progress so that funders do not lose patience. As such, it has suffered moderately delayed shipments due to buggy firmware and power consumption issues. The original batch of Lockitrons, scheduled for shipment in July, didn't leave the warehouse until October.

There were more than 10,000 units ordered, but Lockitron was shipping batches of 250 at a 7 to 9 week delay, so it is going to be a while before the first group of customers even gets their order.

Goji was funded on Indigogo rather than Kickstarter, and raised a modest $313,457 from just over 1,200 backers.

Clearly taking its design inspiration from the Nest smart thermostat, Goji is by far the most expensive of the bunch with a $245 price tag. Unlike August, which promises an untold number of authorized users, Goji is limited to just a few, and includes four electronic keys.

Goji's most relevant feature is its interoperability with existing home automation platforms. In addition to Wi-Fi and Bluetooth, it also includes a ZigBee wireless radio, which is a common standard among home automation products. It has also partnered with iControl, the company responsible for Comcast xFinity and Time Warner's home automation systems, so that Goji can be integrated into the larger service provider infrastructure.

Goji was also selected as a finalist for Wal-Mart's "Get on the Shelf" campaign, but it lost to – and I'm not making this up–  Elvis Presley blankets.

Lockmaker Kwikset beat August to the punch by shipping its own Kevo smart lock two weeks ago. It's based upon the "UniKey" design that was shown on investment TV show Shark Tank (and is also licensed to door hardware company Weiser).

The unit costs $219, and the reality of smart locks seems a lot less rosy than the vision presented by August.

Kevo has a very short-range Bluetooth connection and only works with iPhones later than the 4S.  In early tests, it's also been called a bit slow. The most glaring problem with Kevo, however, is that it comes with even fewer authorized users than Goji.

Kevo comes with just two "eKeys," and any further phones the user wants to authorize for access will cost $1.99 per device. To make matters worse, these eKeys cannot be transferred to other users.

It's an imperfect system with a high price for only modest functionality. However, it was the first to market, it carries a trusted brand name, and gives consumers a realistic level of expectation for what a smart lock can do.

Permian Basin Oil Production
West Texas is growing into one of the most important hubs in the U.S. shale boom. Before long, it will reach the output level of Kuwait and other major oil producing nations...
Investing in Bitcoin
Bitcoin is rapidly gaining popularity around the world as federal governments begin to recognize it and the value shoots up...
Is Dropbox worth $8 Billion?
Dropbox is looking for a massive $8 billion valuation ahead of a big move in 2014.
Hydrogen Fuel Cells: The Downfall of Tesla?
Lithium has been the front-runner in the battery technology market for years, but that is all coming to an end. Elon Musk is against them, but Jeff Bezos is investing heavily in them. Hydrogen Fuel Cells will turn the battery market upside down and we've discovered the tiny company that is going to make it happen.