If you're planning on driving this Labor Day weekend, be prepared to pay more at the pump.

And don't expect gas prices to come down after the holiday.

AAA reports the national average price for gasoline is now about $2.84 per gallon. That's almost 17% higher than gas prices were last year. And it's the highest consumers will pay for gasoline during Labor Day weekend in four years. 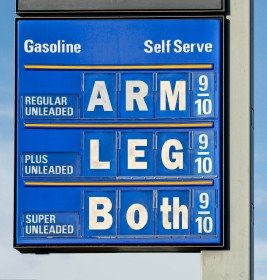 There are a lot of reasons gasoline prices are higher than in recent years. But the main drivers of rising gas prices right now are U.S. inventories and the looming trade sanctions against countries that import crude oil from Iran.

As I'm sure you well know, back in May, President Trump signed an executive order that would remove the United States from the so-called “Iran deal.” And it stated the U.S. would impose sanctions on other nations buying Iranian oil.

These sanctions have been on the lips of every financial media reporter all summer. A few weeks ago, the president updated that order with a new EO that made changes to the sanctions policy.

The second phase, however, is the big one. This phase singles out Iran’s financial and energy sectors, including the nation's central bank and oil exports.

It also targets Iran's port operators, shipping, and shipbuilding sectors in an additional effort to hit the nation's energy industry.

Some European countries have already begun to decrease Iran oil imports and appear they will comply with pressure from Washington.

Others, however, like China, have already said they will not give in to Trump's demands.

The geopolitical discourse over these sanctions is bound to make more enemies than friends. And the result will very likely be increasing oil prices.

All this means you'll probably be shelling out over $3.00 per gallon for gasoline again before Thanksgiving.

And we haven't even talked about hurricane season. September is the most active month for hurricanes, which typically drive oil prices higher almost every year.

So if you fill up your car this weekend, take a photo of the price sign. It's probably the last time you'll see gas prices under $3 a gallon for a long time.

Buy Gold to Protect Against Currency Crisis
The price of gold has lost as much as 14% since April, falling all the way down to $1,160 per ounce. Has the yellow metal bottomed? Energy and Capital editor Luke Burgess explains whether or not gold is a buy at its current price of $1,185 per ounce...
Don’t Sleep on the CWB Holdings IPO
If any cannabis company deserves to do well, it’s this one.
Euphoria in the Markets
Energy and Capital editor DeHaemer talks about the stages of the bull market. Right now, we are in the optimism stage but not quite to euphoria. Speculation is back, and so is good, old-fashioned ETF investing. Here are some companies with value going forward...
Hydrogen Fuel Cells: The Downfall of Tesla?
Lithium has been the front-runner in the battery technology market for years, but that is all coming to an end. Elon Musk is against them, but Jeff Bezos is investing heavily in them. Hydrogen Fuel Cells will turn the battery market upside down and we've discovered the tiny company that is going to make it happen.