Khashoggi Murder Could Push Oil Prices to $400 or More

The White House is downplaying the murder of this Khashoggi fellow.

That's because they know it could lead to another all-out trade war with Saudi Arabia. Or worse.

If you're not already familiar with the story, let me bring you up to speed:

Jamal Khashoggi was a Saudi journalist and longtime critic of the kingdom's government. His last position was as editor-in-chief of the Al-Arab News Channel, a progressive news channel that vowed journalistic objectivity. Or at least it would have, had the government not shut it down immediately.

Al-Arab News was on air for less than 11 hours before authorities pulled the plug.

Khashoggi, who had been critical of Saudi leaders for years, felt he might have gone too far this time. So he fled the kingdom, fearing for his life.

Now living in Turkey, Khashoggi wanted to get married. Doing so meant going to the Saudi Arabian consulate in Istanbul for the proper documents. And on October 2, that's exactly what Khashoggi went to do.

While his fiancée waited in the car, Khashoggi went into the consulate. But he never came out.

After the consulate closed and Khashoggi never came home, his bride-to-be reported him as a missing person. And by October 15, there were news reports claiming Khashoggi was murdered and dismembered inside the consulate.

The Saudi government first denied the death. It said Khashoggi had left the consulate alive. But CCTV cameras show otherwise. Two off-grounds cameras show Khashoggi going in, but neither shows him leaving.

Trump said he would consider sanctions against Saudi Arabia if there is proof the government was involved in Khashoggi's killing. And that's when the economic community started to freak out.

Turki Aldakhil, general manager of what equates to the state news in Dubai, said any sanctions against Saudi Arabia would have devastating global economic effects. Such a move, he said, could push oil prices to over $400 per barrel.

“If US sanctions are imposed on Saudi Arabia, we will be facing an economic disaster that would rock the entire world,” Aldakhil wrote. “It would lead to Saudi Arabia's failure to commit to producing 7.5 million barrels. If the price of oil reaching $80 angered President Trump, no one should rule out the price jumping to $100, or $200, or even double that figure.”

Then on Friday, the Saudi Arabian government admitted Khashoggi had in fact died inside the consulate. It claims he had been strangled to death after a fistfight broke out. Who knows if this is true or not? They already lied about this story once.

Still, 18 Saudis have since been arrested. And now Trump has to figure out what to do with the whole situation.

Does he impose sanctions against Saudi Arabia?

Or does he look like a chump who's going to back down?

Well, I think it's very unlikely sanctions will be imposed. Saudi Arabia is a major trade partner with the United States. Energy aside, Saudi Arabia is actually America's largest customer of weapons.

Last year, Trump signed a $110 billion arms deal with the kingdom. It's very unlikely that the defense industry is going to sit idly by while sanctions are imposed.

So does Trump just end up looking like a chump with empty threats?

Well, Trump isn't going to allow that, either.

Most likely, the White House will downplay the whole situation. They know if they just wait long enough, the public will move on to the next headline. And if Trump is pressured to react, my guess is he'll simply use his mastery of rhetoric to avoid sanctions.

The murder will probably be blamed on a rogue agent working for the government. And I suspect both will say there was nothing either government could have done.

But there's more at stake here. 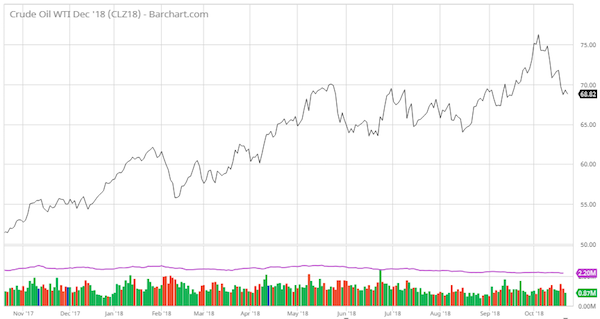 Trump and OPEC have been going back and forth for months. On Twitter alone, Trump has directly attacked OPEC more than a half-dozen times. The Khashoggi incident is another blow to deteriorating relations between OPEC and the U.S.

And if OPEC really wants to screw over the United States, it can... with another oil embargo.

One-third of America's oil imports come from OPEC countries, equaling about 3.4 million barrels per day. That's significant to the United States. But it's really just a drop in the bucket for OPEC.

OPEC produces 40 million barrels of oil per day. If the cartel imposed an embargo against the United States, its sales would only be moderately affected. Whereas losing imports of over 3 million barrels per day would be disastrous for the U.S. supply.

An OPEC oil embargo might seem unimaginable right now. But let's consider that it has happened in the past as a result of deteriorating political relations. Good trade is only achievable through peace.

Trump would be wise to tread lightly with the Saudis. While it's unlikely America will impose sanctions against the kingdom, the kingdom may be planning to impose an embargo on America. And that really could drive domestic oil prices to $400 or higher.