Water, Water, No Where

Ah, how many countless times have we heard of Big Oil gouging the little guys...

Come on, you've heard the horror stories. The ones flooding out of Dimock, PA, for example.

It doesn't even matter if the facts turn out to be true or not (the EPA recently reported that the County's well contaminations were naturally occurring and not from drilling operations).

It's true, Big Oil has a history of sticking it to the little guys. Perhaps that's why it's that much sweeter when we see the situation reverse itself.

That's precisely the feeling we got after watching Kansas farmers deal with oil companies.

How can they be in such a profitable position?

Water, Water, No Where

We are all well aware of the large amounts of water needed by these companies, and particularly the ones developing the vast unconventional oil and gas resources across the country.

Usually, it takes more than two million gallons of water for the hydraulic fracturing process. Some have even suggested that amount is probably more in the 5-7 million gallon range.

Remember, that's per well... so you can probably guess that water supplies can get pretty tight during a drought.

In Texas, home to both the Eagle Ford and Barnett Shale formations, it's the agricultural industry that lays claim to the majority of water supplies – as much as 57% in 2010. Now toss in the millions of residents that rely on the various rivers, lakes, and 23 aquifers for their drinking water.

It's unfortunate for these oil companies that we're currently in a terrible drought: 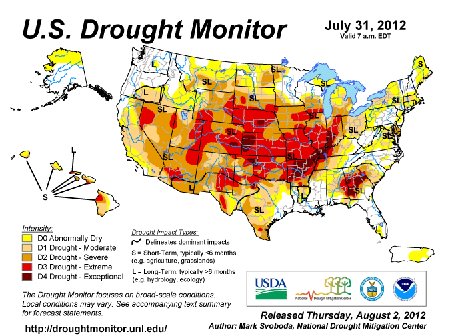 Some of you might remember last year when Texas authorities were forced to limit water usage by both residents and oil and natural gas companies.

That can be a problem, considering the tremendous growth taking place in Southern Texas. The number of drilling permits being issued in 2012 is well on its way to eclipsing last year's record: 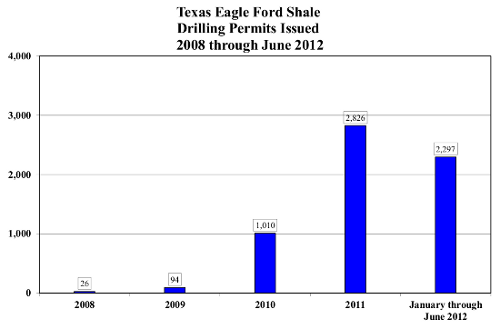 It's the same story with production: 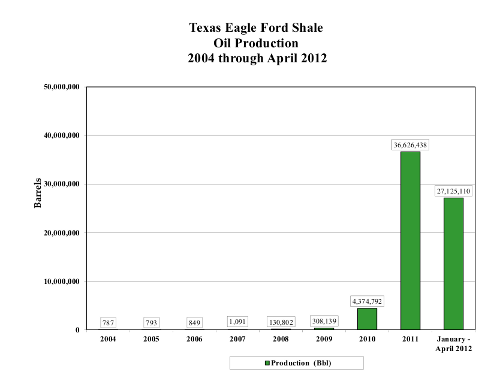 Four years ago, it was rare to come across another investor that had heard of of the Eagle Ford formation. After all, it took the $12.1 billion buyout of Petrohawk Energy by BHP Billiton for other people to stand up and take notice.

Now, the sudden emergence of the Eagle Ford as a major shale producer reminds me of another relatively unknown play in Kansas. Kansas also happens to be one of the states that was recently put into the 'extreme drought' category by the National Drought Mitigation Center.

And this upcoming Kansas oil boom is giving farmers the opportunity to gouge the big oil companies...

In the past, Kansas farmers would sell these major oil companies their water for only twenty cents per barrel.

Today, however, these same farmers are selling their water supplies for more than triple that price, and that's if they decide to sell it at all. If the drought continues or worsens going forward, the cost to fracture their wells will become quite burdensome to Big Oil's coffers.

Using millions of barrels of water per well, it's safe to say they can make a pretty penny holding out and forcing companies to pay top dollar.

Unfortunately, there's one huge catch to all of this, and it's the reason their price-gouging may not last much longer.

They have one serious problem to deal with – what happens when Big Oil doesn't need their water any longer?

We're a lot closer to that reality than most will believe. I've been tracking a company that's spent years perfecting their fracturing technique in Canada.

Fact is, droughts can always get worse and the U.S. absolutely cannot afford to slack on drilling.

Right now, six out of every ten oil and gas rigs are drilling horizontally. Between the Bakken and the Eagle Ford formations, there are 472 rigs drilling night and day, accounting for about one-quarter of all U.S. drilling activity.

Every single one of those new wells needs to receive some form of fracture stimulation.

Of course, that isn't even mentioning the added benefits that come with it. That is, greatly reducing the truck traffic that comes with typical hydraulic fracturing means, nearly eliminating any damage to the rock formation, and having the ability to recover every drop that goes into the well – all while increasing production.