Is Tomorrow's Tesla a Faraday Future?

“You don't need to have a hundred-year legacy in the automotive industry to define what the next generation of transportation needs to look and feel like.”

Faraday is just one example of a new company that has broken into an old market and made its mark.

You see, for a long time, the world relied on the same handful of car companies to cover transportation demand. It wasn't a market that was easily broken into.

But the breaking has happened. And while it didn't necessarily start with Tesla Motors, the company has certainly been the most successful entrant.

And it did it by playing on a niche market that hadn't yet found its feet: electric vehicles.

Tesla has progressed from expensive sports cars to its mass-market Model 3, which will hopefully be available for purchase in 2018. The car will be an averagely-priced $35,000.

But of course the problem with breaking into an established market is that its members aren't likely to just let you come in and take over.

So many of the largest car companies in the world are working on their own EV's, putting their own well-known 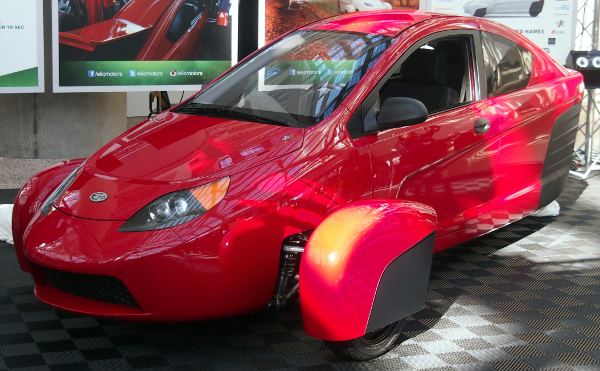 brands on the niche. One of the most concerning for Tesla is Chevy's Bolt, which will be out later in 2016 and cost a competitive $30,000.

Aside from the lower cost, Tesla will also have to compete with car makers who are already experienced mass-producers. The EV company has a history of production problems, though it hopes its coming Gigafactory in Nevada will help with that.

Faraday Future is also working on its own Nevada factory to help scale-up production of its first car; this factory is set to be online by 2018.

It's a race to gain the largest share in the niche market of EV's, and new companies are joining in every day.

Google and Apple, tech giants though they are, each have a car in the works already. Apple has been more hesitant to admit its intentions, but Google's cars have already seen real world tests.

And a few start-ups are even coming forward with new technologies, such as Elio Motors with its three-wheeled car (pictured above), and Local Motors with its 3D printed car.

The tech is only going to get crazier from here. The strong, established car market of old is no more.

Metal Oil Stocks
Energy and Capital editor Keith Kohl takes a closer look at the lithium revolution and why it could be the deathblow for oil.
The Driverless Car Revolution
Back in the late 1990s, you'd see lots of research from Rand or the Forrester Group that would claim that a gazillion people would be on the Internet or cell phones within a decade. It all came true.
Wireless Charging for Your Google Car
Energy and Capital editor Keith Kohl delves into the achievements and setbacks of wireless charging technology.
Lithium Value on the Rise
Energy and Capital editor Keith Kohl gives an overview of the boom in lithium so far.
Hydrogen Fuel Cells: The Downfall of Tesla?
Lithium has been the front-runner in the battery technology market for years, but that is all coming to an end. Elon Musk is against them, but Jeff Bezos is investing heavily in them. Hydrogen Fuel Cells will turn the battery market upside down and we've discovered the tiny company that is going to make it happen.