Just a decade ago, the thought of the U.S. being a net exporter of oil or natural gas was laughable.

Now you can't help but ask, is this about to become a reality?

Anyone paying attention to either of those industries should know full well that our country's tight oil and gas resources can boost domestic production within a short period of time.

And now that the price of both commodities is finally retreating from the lows, we’re facing a whole new problem...

What's worse is that it could reset the shale revolution all the way back to square one.

But before we get to that, you have to take a closer look...

Not the First Time

In early 2016, when the first shipments of U.S. LNG were loaded into tankers and sent across the ocean, people applauded the first LNG exports from the country ever.

They were wrong about that, of course.

The U.S. has actually been quietly exporting LNG from its one and only commercial port in Kenai, Alaska, for decades.

The Kenai LNG Plant, owned and operated by ConocoPhillips, has been exporting LNG since 1969, mostly to Japan.

However, Kenai only exports a very little amount of gas. The plant was recently approved to send out around 40 billion cubic feet of LNG over the course of two years.

To put that in perspective, the U.S. imported more than 91.5 trillion cubic feet of gas as LNG in 2015, even as domestic production from the Lower 48 was climbing. 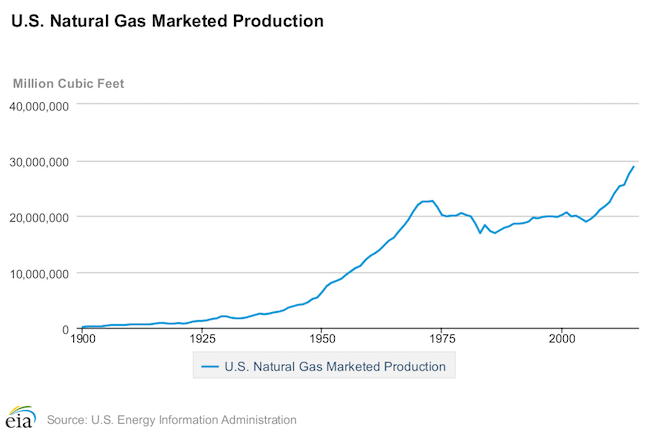 We’ve seen the fastest production growth in the history of the U.S. in the past decade, and improved drilling technology means it’s not likely to slow down soon.

But now we face a new problem: getting all that supply out to market.

It’s one thing to have a single state exporting on its own. But we’re going to need a lot more than a lone LNG terminal to get a real piece of the global gas market.

The problem is that the main production hubs are widely disconnected.

It’s not just Alaska’s geographical position, either. If you think it’s any easier getting supplies across the continental U.S., think again.

The two biggest sources of natural gas in the U.S. are the Marcellus shale play in Pennsylvania and the Permian Basin in Texas. These two states alone accounted for 18% and 26% of gas production in 2015.

As if these weren’t far enough apart, the country also produces gas from the Bakken play in North Dakota and the Greater Green River Basin of Wyoming.

Now, the country does have a pretty wide-reaching pipeline system, with about 305,000 miles of pipelines that operate within and across state borders.

In the past few years, however, production has far outstripped that transportation capacity.

Forget for a minute that most pipelines don’t run at 100% capacity all the time anyway; even if they did, there’s just not enough to move all this gas from thousands of miles inland to the few coastal export terminals running today!

We’re already seeing this problem come to a head in the Gulf, where pipeline exports to Mexico can’t get across the border fast enough.

Even today’s existing infrastructure is having some trouble adjusting. Most of the country’s gas pipelines were built to bring supply into the country, not send it back out.

All the supply in the world doesn’t mean a thing if it can’t get to a buyer, and there are plenty gunning for U.S. gas.

Already, the country has sent out tankers headed for India, Brazil, Argentina, China, Chile, Spain, and more, all from the Sabine Pass in Louisiana.

Right now, the plant has two liquefaction trains running, with another four under construction or in development. Five of them are already under contract to start exporting LNG as soon as they come online.

Of course, that will only happen if the U.S. finds a way to actually get its ample supplies down to Louisiana in time...

Trump has put his foot down and finally approved the Keystone and Dakota Access pipelines once and for all.

That’s just the beginning. The U.S. is going to need some massive infrastructure improvements over the next few years to support its new position as a global swing producer.

Keep in mind that no matter what commodity prices look like, they will always need to be moved, which means pipelines will stay in demand no matter what kind of turn the market takes.

In coming weeks, I’ll be sending out my analysis on the situation and naming a few choice stocks that are set to make the most of this dire situation.