If you’re making investment decisions based on a tweet, you’re doing it wrong.

So, when President Trump starts suggesting that he would meet with Iran at any time, anywhere, and without preconditions, one would think it’s a signal that he’s ready to capitulate on his looming sanctions.

I have some bad news for you.

In fact, the first wind-down period ends in only five days.

We talked about this sanction timeline recently, with the most important phase taking effect on November 4, 2018.

Remember, this is the date when all hell breaks loose for Iran, as sanctions affect the country’s petroleum-related transactions.

And once these oil sanctions hit, how desperate will Iran get?

After all, they do have one catastrophic ace up their sleeve. I would even go so far as to say it’s the most powerful weapon in Iran’s arsenal, and one that could send crude oil screaming over $100 per barrel overnight.

Yes, it’s THAT bad... but not necessarily for us.

Okay, you’re probably asking yourself how Iran can disrupt things this badly.

Surely the nearly 4 million barrels of crude that Iran exports on a daily basis isn’t that big of a deal, is it?

Even though the country is OPEC’s third-largest exporter, the oil cartel (along with Russia) has actually done a good job keeping a lid on output so prices could rebound.

And to its credit, the price for a barrel of West Texas Intermediate has gained 158% since bottoming in February 2016.

The Saudis have even boasted lately that they would be able to absorb most of those barrels lost to U.S. sanctions (I’ll get back to this in just a second).

That’s quite nice of them; I’m sure Iran will be thrilled to give up its market share.

Unfortunately, it’s not Iran’s exports (or lack of them, in this case) that have me concerned. Like I just said, the Supreme Leader has one option that would throw global oil markets into turmoil.

And it all comes down to the Strait of Hormuz.

It’s a good bet that you’ve heard of it before.

In the past, it’s become Iran’s go-to retaliatory plan, the one legitimate action it can threaten that’ll make world leaders — yes, even President Trump! — sit up and take notice. 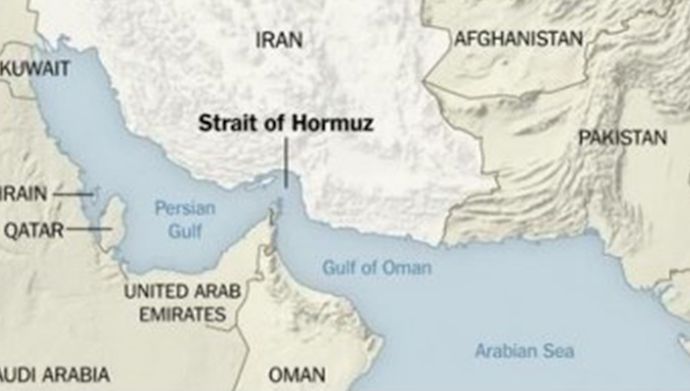 That narrow piece of water connecting the Persian Gulf with the Gulf of Oman, however, happens to be one of the most crucial chokepoints in the oil trade.

The amount of crude that passes through the Strait of Hormuz is staggering.

I’m talking about more than one-third of all seaborne oil exports and roughly one-fifth of the world’s total oil trade!

That, dear reader, is about as ugly as things can get.

And like clockwork, Iran came out yesterday and said any oil sanctions against it would affect the Strait of Hormuz.

Is this just another bluff?

It may be enough to bring everyone to the table.

Anyone who tells you they know exactly what Trump will do next... well, I have a bridge to sell you first.

Truth is, closing the Strait of Hormuz may be one of the few disastrous events left that could send oil prices back over $100 per barrel in quick order.

Don’t worry, there’s some good news in all of this doom and gloom.

It turns out you don’t need a doomsday scenario to turn this U.S.-Iran spat into an advantage for your portfolio.

As you read this now, countries are preparing for these oil sanctions to take effect as scheduled.

That gives them roughly 13 weeks to adopt a plan.

India is one of those countries.

You see, it just so happens that Iran is India’s third-largest source for crude imports. It shouldn’t be a surprise that India’s looking for alternative suppliers. In fact, India cut its shipments of Iranian crude in June by about 12% compared to the previous month.

Who can India possibly turn to in order to satiate its thirst for crude oil?

Well, let me show you:

Next week, I’ll give you a free sneak peek of my favorite winners in this oil export game.