Investors Should Look to Commodities on Sale

Investors should be looking toward commodities as tensions with Iran and other nations heat up. 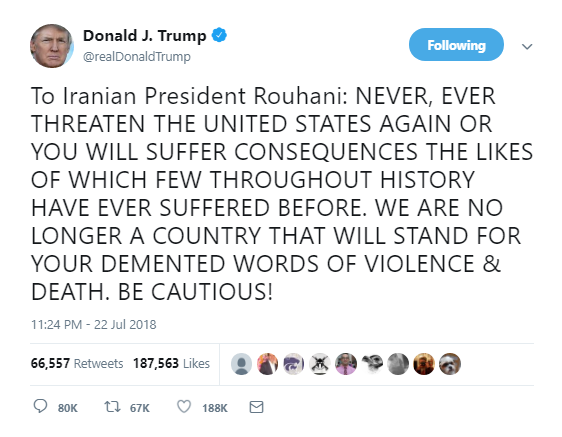 Did you ever think wars could be started over Twitter?

Commodities mostly shook off the rhetoric this morning, with crude oil for September delivery up a little over 1% and gold a few cents higher.

But with political strife escalating between Washington and the rest of the world, investors might want to consider increasing their oil and gold positions.

Crude oil has recently pulled back from its four-year high of nearly $75 per barrel earlier this month. At last look, the oil spot price was $68.23/bbl. But with fresh threats of a hot war with Iran, the price of crude could easily bounce right back.

There is a strong correlation between wars in energy-producing nations and disruptions to oil output. And Iran is one of the largest oil-producing countries in the world. Any military engagement could significantly affect global supply and will most certainly cause oil prices to rise.

Against the backdrop of rising tensions with Iran is also, of course, trade and currency wars with China and the EU, as well as political clashes with Russia. It seems that every day, Washington is making a new enemy.

All this is very likely to result in higher oil prices as sanctions increase, exports decrease, and fiat currencies lose their value.

This week is quite important for Big Oil, as majors including Exxon Mobil (NYSE: XOM) and Royal Dutch Shell (NYSE: RDS.A) report their quarterly earnings. Keep an eye out for those earnings and buy on any dips.

Meanwhile, there's a sale on gold that most of the market is ignoring. The price of gold just bounced off a 52-week low. And it may have just bottomed.

There is an assumption that the price of gold rallies during wartime. But there really isn't enough historical data to back that up. It's true that gold prices increased after 9/11 and following the war with Iraq. But gold prices actually fell during the 1990s Gulf War. And the gold market as we know it today has only been around since the mid-1970s.

Wars are expensive. Nations rack up tremendous amounts of debt during war, even for the smallest conflict. This drives up the demand for money, and central banks pump it out, causing inflation and devaluing their currency.

Now, again, pepper in the fact that Trump is now openly in a currency war with China and the EU — which seeks to competitively devalue the USD, euro, and yuan — and gold looks to be on sale right now.

Over the longer term, both gold and oil look even better. Both oil and gold will benefit from years of underinvestment. Since the price of both oil and gold began to slump, starting in 2012 for gold and 2014 for oil, investment money for exploration and development has dropped.

Since 2012, global budgets for gold exploration and development have decreased by more than 50%. Meanwhile, capital expenditure for oil development has also been cut in half since 2014.

Lower exploration and development will put a cap on maximum output in the future and will likely be the main driver of supply problems in the longer term. Some analysts have even called for $150 oil just based on the industry's years of underinvestment.

Both gold and oil look to be on sale right now. Buy both.