The Chavez School of Investing

Hugo Chavez served as president of Venezuela from February 2, 1999, until his death on March 5, 2013. During his time in office, Venezuela saw many changes.

But his presidency also saw increased corruption in the police and government and ultimately led to more poverty than ever before, shortages that are still sweeping the nation, and massive inflation that’s made the national currency essentially worthless.

So, what happened? And what, as individuals, can we learn from it?

It just so happened that while Chavez was in office, oil prices were rising to the highest levels in history. And that was the only thing that allowed him to make the social changes he’s credited with. His country had one product: oil. And it was practically more valuable than gold.

It’s easy to see why Venezuela was looking pretty good with Chavez at the helm. GDP per capita was heading higher the entire time he was president. But oil prices were doing the same dance, too.

When oil prices dropped during the worldwide recession in 2008–2009, GDP did, too. But Chavez had the out of being able to blame the capitalist pigs in America for all the woes of the world.

And he was lucky enough to die while oil prices were still on the rise. His replacement, Nicolas Maduro, wasn’t so lucky. And Venezuelans hate him for the condition of their country right now.

Since Maduro took the helm back in 2013, oil prices have dropped precipitously. Per-capita GDP in Venezuela has done the same:

Don’t get me wrong; I think Maduro needs to be replaced.

In fact, I think the entire Bolivarian government needs to change. The Supreme Court is corrupt and constantly trying to strip power from the Congress and give it to the president. The president is inept and is continuing the same pattern begun by his predecessor. And history has shown us that communism just can’t work as long as there are people in charge. They’re too susceptible to corruption.

But I’m just saying it’s not Maduro’s fault. All the blame falls on Chavez.

Feed the Pig and Cut the Card

Venezuela could be in much better shape if he hadn’t squandered all the money it made when oil prices were high. The social programs were ridiculously expensive, and when prices fell — heck, even before prices fell — they were being funded by deficit spending. That doesn’t work.

So, there are our first two lessons from the Chavez School of Investing.

Lesson number one: You’ve got to save some money.

That new car may be tempting. That family vacation to Disney World may sound great. But when times turn, you need to have a cushion saved up.

You just can’t go around spending every dollar you earn.

Lesson two: Ease up on the credit cards.

When we use credit cards, we’re basically spending on deficit. We don’t have the cash to finance that purchase, so we borrow it. But just like Venezuela, we’re paying some massive interest on that loan.

Credit cards charge 17% to 30% interest on outstanding balances. You’d be hard-pressed to find any portfolio that’s going to give you those returns. And you’re going to be hurting while you try to pay off the loan. You might never even be able to pay it off.

What Else Can We Learn?

Well, those first two are great lessons. But Chavez can teach us at least one more important one.

Oil entirely drove Venezuela’s economy while he was in power. Before he took control of the country, manufacturing and agriculture played a role in supporting GDP. But when he came into office, he nationalized nearly every industry and drove out foreign investments. Companies that were running the manufacturing closed shop and headed out. Big farms shut down and moved their operations to countries where they could still control them.

Even in 2009, manufacturing still contributed 15% of GDP. But that’s no longer the case. Any companies that stuck around can’t get supplies to build things anymore. So, they’re gone now, too.

Non-oil exports rose a little in the middle of Chavez’s tenure. But they’ve been falling ever since. 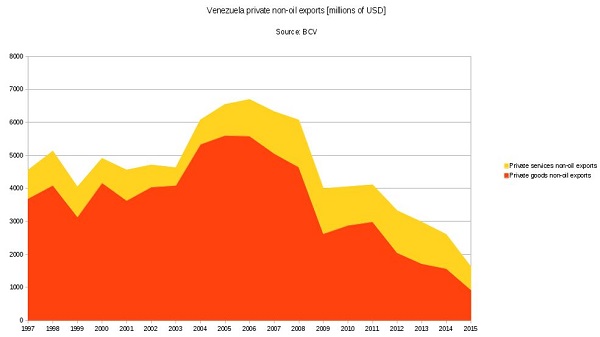 That left Venezuela dependent on oil. More than half of the country’s GDP depends on oil, and about 95% of its exports are oil.

Venezuela was destined for failure. As soon as oil prices took a hit, GDP would collapse and chaos would ensue.

Without that cushion of savings, there was nothing to prop up the economy while prices recovered.

And that should teach us the importance of diversification. It’s a perfect example of putting all your eggs in one basket.

It can happen to individual investors, too. If you’re only investing in one industry, you’re setting yourself up for failure. If anything negative happens in that industry, you’re wiped out.

And when I say diversification, I’m not talking about spreading your cash out in a bunch of companies that do the same thing.

You can’t invest in Exxon, Chevron, and BP and call your portfolio diversified. You need to get a bit of skin in a lot of games.

If you’ve got big holdings in oil, then you should also have some in technology, consumer staples, and fixed income.

You don’t want to get caught owning Apple, Cisco, and Microsoft when a massive shift comes in the industry. You don’t need to be invested in both Wal-Mart and Target. Pick one. Or if you just have to invest in both, have other holdings in different industries to balance it out.

Diversification is crucial to the health of a portfolio. Even the great Warren Buffett, with his small cadre of investments, spreads his money out across multiple industries. He owns airlines, banks, wholesale stores, technology stocks, and consumer goods providers. He’s got agricultural companies and oil companies. He’s investing in communication and shipping companies. He does bet big on a few companies, but he doesn’t bet it all on just one industry. If something happens to the airline industry, he’s still got banks and consumer staples to cushion the fall.

And you need to do that, too.

There are many other lessons we could learn from the devastation that’s befallen Venezuela and its people. But as investors, those three are some of the most important.

So, take heed of the Chavez School of Investing and save your money, spend no more than what you have, and diversify your investments.

If you follow those three rules, you’ll protect yourself from poverty, shortages, and industry shakeups.

To investing with integrity (and learning from the mistakes of others),

U.S. Crude Oil Going to... Venezuela?
Energy and Capital editor Keith Kohl looks into the reasons behind Venezuela importing supplies of U.S. crude oil.
Will Venezuela Be the End of OPEC?
This may finally be the straw that breaks the camel's back. Energy and Capital editor Keith Kohl shows readers how U.S. sanctions could be the end of OPEC as we know it.
Unites States of Venezuela
Venezuela has been in collapse for a long time, and things are finally coming to a head. Christian DeHaemer tells you how what's happening in Venezuela can happen here.
Hydrogen Fuel Cells: The Downfall of Tesla?
Lithium has been the front-runner in the battery technology market for years, but that is all coming to an end. Elon Musk is against them, but Jeff Bezos is investing heavily in them. Hydrogen Fuel Cells will turn the battery market upside down and we've discovered the tiny company that is going to make it happen.