This is BETTER than Oil!

I've never understood it, but no one really gives a damn about water.

Sure, it's the foundation of life. But what does that matter when we can get cheap smartphones and Internet-connected washing machines? Those things are exciting, and there's proverbial gold in those silicon hills.

Don't get me wrong; I love technology and continue to profit handsomely by devoting a small portion of my portfolio to tech stocks. My point, however, is that while technology is great, without water, we die.

It's pretty simple, really. Yet when it comes to investing, few investors take the time to realize just how lucrative water is. Well, except for all those farmers out in California.

But who cares about that, right? I mean, it's not like California feeds most of the country.

Sarcasm aside, I've long been bullish on opportunities in the water space. Some of my favorites in this space include Xylem, Inc. (NYSE: XYL), Calgon Carbon (NYSE: CCC), and Aqua America (NYSE: WTR), which actually pays a nice little 2.4% dividend.

As we move forward, I'm confident that water will prove to be one of the most highly valued commodities on the planet. You know, because we need it to live.

Aside from my passive-aggressive diatribe about how ridiculous it is that we don't value clean water more than we do, I'm not the only water bull in the arena.

In fact, the CEO of Abengoa subsidiary Abengoa Yield (NASDAQ: ABY), Santiago Seage, recently suggested to Forbes reporter Ucilia Wang that the yieldco is looking to get into the water game as a way to capitalize on increased drought conditions and global population growth.

Seage is enthusiastic about adding water delivery and treatment projects, such as desalination plants, given the growing public worries about drought and depleting groundwater resources in the U.S. He pointed to a 30-year contract totaling $3.4 billion that an Abengoa-led consortium won last year to build and operate wells, collection stations, and pipelines to deliver water from two aquifers to San Antonio. Abengoa expects the project to come online by 2020.

Aside from the San Antonio project, Abengoa also announced last week that it was building the world's largest solar desalination plant in Saudi Arabia. When completed, the $130 million project will desalinate 60,000 cubic meters of seawater a day.

Abengoa Yield took a bit of a tumble last September, falling from around $40 a share to about $25 a share (although it should be noted that the company's only been public since last June).

That being said, over the past month, this young yieldco has started to swim back upstream. The stock has actually gained about 30% within the past 30 days: 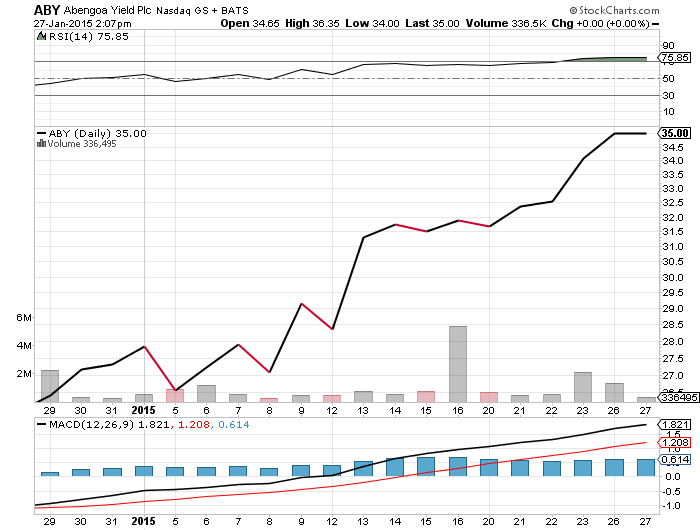 Abengoa (NASDAQ: ABGB) has also climbed about 30% over the past 30 days: 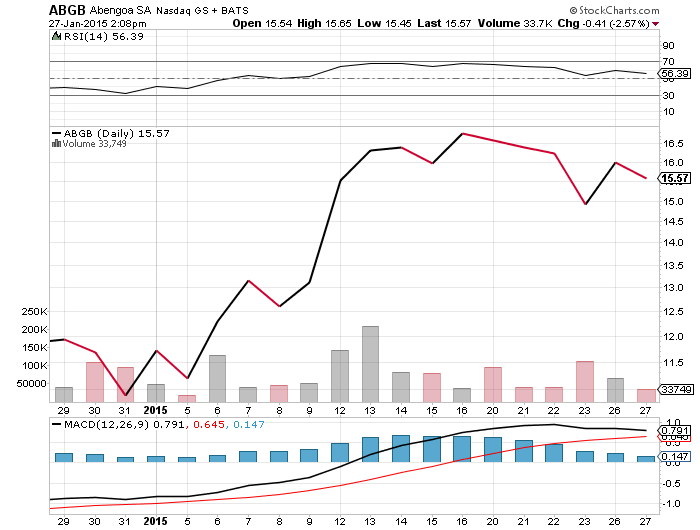 I don't really think you can go wrong with either one, but I do like the 3% dividend on Abengoa Yield.

I also remain quite bullish on renewable energy development companies and yieldcos this year. Hannon Armstrong (NYSE: HASI) and Pattern Energy (NASDAQ: PEGI) continue to be two of my favorites.

Of course, there are any number of ways to play water. Infrastructure, wastewater services, and water reclamation are just a few. And all of these water-related industries have a lot of potential.

However, you're probably not going to get stinking rich with water stocks.

Over the long term, water is a solid play, particularly if you can collect a nice dividend. But these are definitely not the types of stocks you want to jump in and out of, at least if you need a little stability in your life.

No, these are the long-term investments that, over time, will prove to be more valuable than gold, oil, and smartphones.

Because, well, none of that other stuff matters if you don't have clean water to drink.