Last week, Tesla (NASDAQ: TSLA) announced that its next electric offering — a competitively priced electric vehicle — will hit the market in 2017.

Certainly this was big news for electric car enthusiasts — particularly those who can't afford an $85,000 Model S but yearn to drive one. But if you regularly follow trends in the electric vehicle space, at least the way I do, you know Tesla's announcement was just one of many big moves in the space over the past few months.

This is great news for those who love driving on homegrown electrons, and it's great news for investors who are looking for more than one way to make a few bucks in the energy space...

Around the same time we learned about Tesla's new Model III, we also got some fresh energy storage market data from the folks over at Lux Research.

According to the research firm's latest analysis, energy storage, driven largely by plug-in electric vehicles, will grow at a compounded annual growth rate of 8% to $50 billion in 2020.

That's less than six years away.

Researchers note that electric vehicles are the largest opportunity in transportation. With modest sales of 440,000 units, electric vehicles still will use $6.3 billion worth of energy storage — more than the micro-hybrids, which will have sales two orders of magnitude higher at 59 million units. 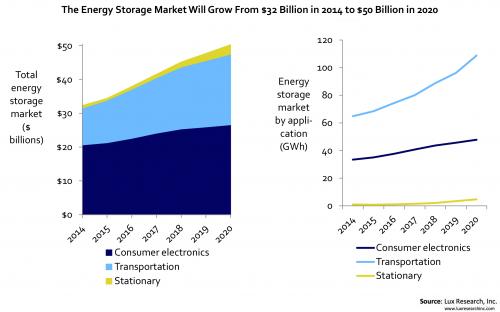 One of the more intriguing bits from this recent report is the following statement...

“...incremental evolutions like start-stop technology are leading to significant changes in the energy storage market. With global sales of 59 million, a 53% market share and $6.1 billion in annual revenue, micro-hybrids will, for the first time, overtake the conventional internal combustion engine and emerge the most popular drivetrain by 2020.”

I have to be honest; I never thought I'd see the day when the most popular drivetrain would be something other than that of conventional internal combustion.

Of course, this doesn't mean internal combustion is going gently into that good night. Such a suggestion would not only be naïve, but also a bit dishonest. However, it is interesting to see how rapidly technology is transitioning the personal transportation market.

Heck, I remember when the Toyota Prius was the technologically superior vehicle when it came to fuel economy. In many ways, it still is. But it's so common now that we almost don't even notice those little hybrid superstars anymore. With more than 3 million units sold, such a thing is understandable.

So will the same be said for electric vehicles in another ten years? I think so.

My prediction is that Tesla will continue to be the most innovative and aggressive electric vehicle player in the market. Nissan and GM will continue to push their electric offerings, most likely with worthwhile upgrades by the end of the decade that'll enable increased range and lower pricing.

Of course, if you're looking for a way to profit from the growth in energy storage applications, look no further than Tesla's new Gigafactory.

If you're unfamiliar, the Gigafactory is a $5 billion battery manufacturing facility that Tesla is building right here in the United States.

When completed, the plant will be massive — capable of producing ten times the current production level available today. This equates to the production of 500,000 electric cars every year starting in 2020.

And with this production capability comes economies of scale that will allow Tesla to slash battery costs. Batteries, by the way, represent the most expensive component of electric cars.

This is a huge game changer, and those who play it right will make a ton of money.

Now let me clarify: I'm not recommending investing in Tesla here. I'm talking about investing in the batteries — more specifically, the companies that will provide Tesla's Gigafactory with the key ingredients it will need to produce these batteries.

Bottom line: This is a no-brainer play on the rise of Tesla. And you won't have to spend $200 a share, which is about what Tesla trades for right now.