Refiners Do Well When Oil Prices Are Low

But wait... aren't crude oil prices down? Isn't the shale boom a bust? Shouldn't we all be panicking our way out of energy stocks?

While media hype and the stock prices of most oil companies make it seem like the sky is falling for oil and gas investors, it's good to know that a few sectors are still thriving.

Perhaps the biggest winners in all of this oil madness are refiners.

Check out how well Tesoro Corporation (NYSE: TSO) has done... 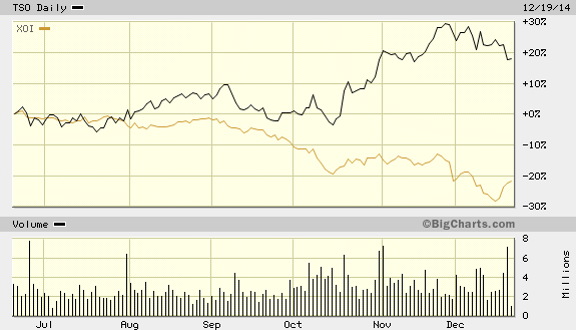 The $9 billion company has gone on a 20% tear since oil prices started to fall, and with cheaper pump prices, gasoline is going to be in high demand while prices are still low.

That's more good news for Tesoro and other refiners.

The story is much the same for ExxonMobil (NYSE: XOM).

The company reported increased profits despite the lower oil prices and a glut in U.S. natural gas. According to the report, Exxon saw a 38% jump in profits from refining and chemicals.

Clearly the low oil prices feed into Exxon's extensive refinery network, and as a result, the company profits no problem.

Check out how they diverge... 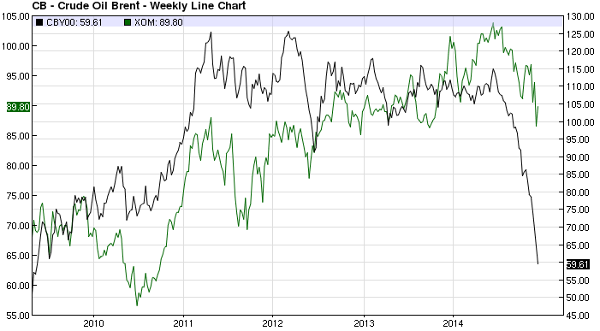 Back in 2010 — another time the sky was falling — Exxon lost most of its share value alongside Brent crude prices. This time, though, as you can see, the oil glut and lower prices have offered more demand and more money for the company.

Even more telling is the fact that Exxon's production of 3.83 million barrels of oil equivalent per day in the third quarter was its lowest output number since 2009.

But this time, the company grew profits on $107 billion in revenue and kept its share price above water.

I'm not telling you all of this to suggest you buy Exxon — or Tesoro, for that matter.

Sure, you could, and you'd probably make some money. But that's not the best — or simplest — way.

The point is that you should see refineries as the way to play the oil glut for gains, profits, and dividends. That way, when oil prices start to rebound (whenever that may be), you'll know it's time to sell.

Most exchange-traded funds are a good way to play an entire sector. However, when it comes to energy and oil, most ETFs stay diversified and don't just track refineries or coal miners or shale wildcatters.

However, I have been following one ETF for refineries — the PowerShares Dynamic Energy Exploration & Production ETF (NYSE: PXE). It has more than 35% of its holdings in refineries. Tesoro is in there, along with other major companies.

The fund still has some E&P firms in it, but that can be good when oil prices rise again because it will lift the whole fund, while refiners keep it diversified in the intermediate.

Of course, this isn't the only option.

If you read my colleague Keith Kohl's column last Friday, you know oil prices are likely to go up in June. And if they don't, you can expect OPEC to see its revenue cut in half for the year.

Keith knows that, for now, the best plays in energy are going to be refiners that are cashing in on higher gasoline demand and cheaper oil prices.

In his new service, Keith has recommended a few refiner master limited partnerships that could take advantage of the lower oil prices.

Even better, the refiners in his portfolio all pay double-digit dividends, which make them attractive long-term income stocks.

His portfolio won't be available to you for a couple more weeks, but while he puts the finishing touches on it, look towards Tesoro, PXE, or other U.S. refiners as safe havens in this bear market.