How to Profit from Pleasure and Sin

It wasn’t the most impressive cannabis dispensary I’ve ever seen.

Just a few miles off the strip in Las Vegas, I visited my first dispensary in Nevada.

The options weren’t quite as abundant as what you might find in Colorado or California, but there was still plenty to choose from.

There was plenty of dried flower, a small assortment of edibles, and a few other standard items one might find in a store that sells pot.

Now, in all fairness, my visit to that dispensary came just a couple of weeks after Nevada legalized recreational cannabis. At that time, they were still having a hard time meeting demand. But a lot has changed since then.

In fact, just last week we learned that more cannabis was sold in Nevada on its initial rollout than in Oregon and Colorado.

For the first month of legalization, Nevada dispensaries sold more than $27 million worth of cannabis. To put that in perspective, on Oregon’s rollout, the Beaver State did $14 million, and Colorado did $3.8 million on its rollout.

By the way, Colorado does about $100 million a month now in cannabis sales.

Make no mistake; while Nevada is not the biggest cannabis market, it is one of the most lucrative. This is mostly due to tourists who spend most of their time in the Silver State looking for pleasure and sin.

But whatever the reason, those who have exposure to the Nevada cannabis market are in the right spot.

I’ve actually written about the Nevada cannabis market in the past.

According to state officials, legal cannabis sales should end up generating about $120 million over the next two years. I think that’s a conservative estimate.

The bottom line is that there are few places more suited for selling recreational cannabis. And there are several public companies with exposure to this market. These include but are not limited to Cannabis Sativa (OTCBB: CBDS), Terra Tech Corp. (OTCBB: TRTC), and the Canadian Bioceutical Corporation (CSE: BCC)(OTCBB: CBICF).

Of those three, I would say BCC has the most lucrative footprint in Nevada, as it owns GreenMart of Nevada. This is a well-known licensed cultivation, production, and wholesale business in Las Vegas.

But rest assured, there will be more.

Get a Piece of the Action

While the Nevada cannabis business is booming, there is still no market more lucrative than the Canadian market.

You see, we are now less than one year away from full-scale adult-use legalization throughout the entire country of Canada. And already, these Canadian cannabis stocks are crushing it.

Take a look at some of the bigger players in Canada over the past couple of years... 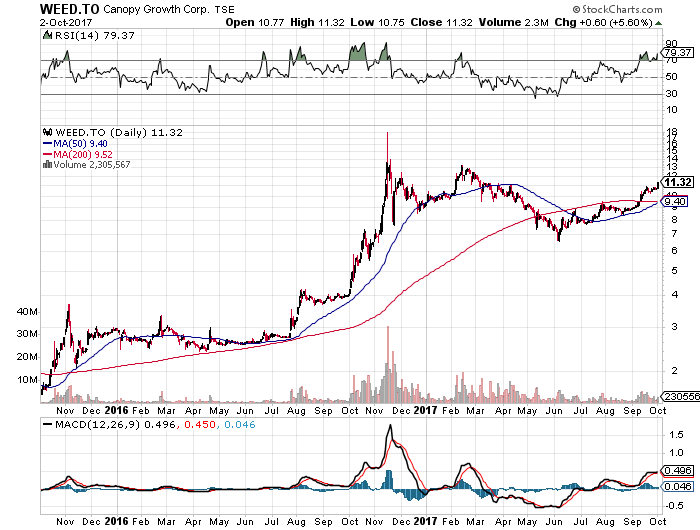 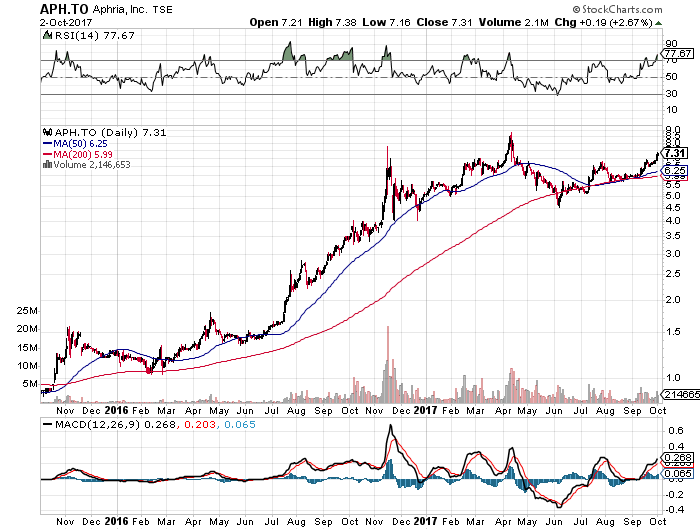 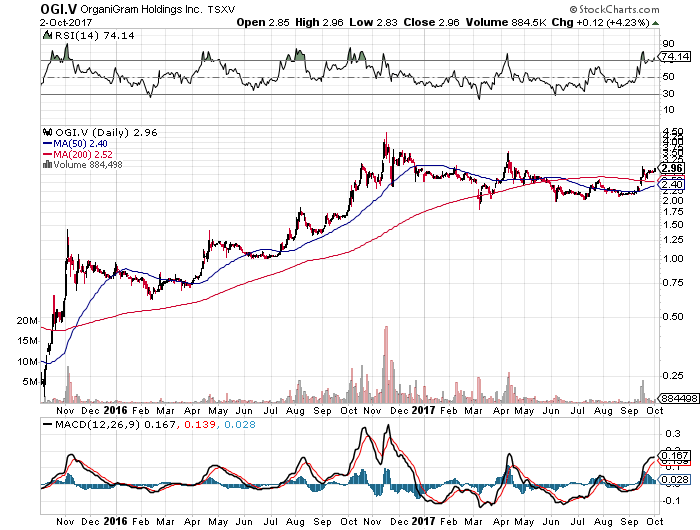 And there’s plenty more to come, too.

In fact, in my “Beginner’s Guide to Legal Cannabis Investing,” you can find a list of more than 40 cannabis stocks you can buy right now. And most of these are trading at huge discounts. You can get a copy of this book by clicking this link.

You can also learn more about the legal cannabis industry by watching my “Introduction to Cannabis Investing” video here.

All Eyes on Canada

Of course, while the Canadian market is the most lucrative, there are other legal and soon-to-be-legal markets that you should also be keeping an eye on. These include but are not limited to:

Interestingly, Canada is the only country that’s actively exporting cannabis to some of these other countries where cannabis is legal.

Yes, there are opportunities all over the world, but Canada is quickly becoming the main hub for the global cannabis market. And that’s why you absolutely should have some exposure to the Canadian cannabis market.

Investing in the Canadian Cannabis Export Market
If you want to profit from the international cannabis market, you must have exposure to Canada. Energy and Capital editor Jeff Siegel explains.
Cannabis Websites are Worth Millions
Looking for a good cannabis investment? Consider cannabis media and lifestyle brands.
Investing in Pre-IPO Cannabis Stocks
Energy and Capital editor Jeff Siegel explains how to buy cannabis stocks before they go public and tells readers about one upcoming deal he's getting in on.
Hydrogen Fuel Cells: The Downfall of Tesla?
Lithium has been the front-runner in the battery technology market for years, but that is all coming to an end. Elon Musk is against them, but Jeff Bezos is investing heavily in them. Hydrogen Fuel Cells will turn the battery market upside down and we've discovered the tiny company that is going to make it happen.