The only word to describe the battery market over the past year is mixed.

A look at a chart of the most recognizable names in the biz — China BAK, Exide, Johnson Controls, Maxwell Technologies, etc. — illustrates this perfectly:

Stocks in the battery sector turned in performances ranging from negative 60% to up 40%.

Indeed, the NASDAQ OMX Energy Storage Index (NASDAQ: ^GRNSTOR) is down 11% for the year, which perfectly reflects the middle ground between the extremes.

And the main topic of battery conversation this year wasn't a positive one...

A123 Systems, which was awarded a $249 million grant as part of the stimulus, was forced into bankruptcy. Instead of being the jolt to the industry many thought it would be, it ended up being the Solyndra of the sector.

The same thing happened to battery maker Ener1. It had approval for $118.5 million in government grants. It received only half of them before it filed for bankruptcy and was delisted from the stock exchange.

But these negatives are only part of the story...

Like is happening in solar, the growth of any industry means some competitors will fail.

In many cases, it's not the product's but the manufacturer's ability to cut costs and increase profits that determines who the winner will be.

Computers and televisions are the prime examples of this phenomenon: The product becoming a commodity is why Chinese-owned Lenovo now makes ThinkPads instead of IBM. It's the same reason South Korea's LG now owns Zenith, which pioneered remote controls and HDTV.

Now the same thing is happening in batteries. A123 may now be bankrupt, but it's not because the lithium battery market is slowing down...

Instead, it's because it had to recall defective batteries made for Fisker and could not generate sufficient profits to pay off debts. 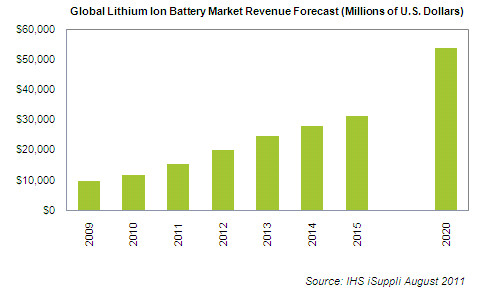 And has this happens, the selling price is falling. And that's what is hurting companies.

Those who can't stay profitable as prices fall will fail. This is what happened to Solyndra in the solar industry, and what just happened to A123.

Like happened with IBM's ThinkPad, A123 batteries will carry on under a new Chinese name...

While the battery manufacturing sector as a whole was down 11% in 2012, the same isn't true for the miners and processors of the materials necessary to make lithium batteries.

Two of the three top holdings in the Global X Lithium (NYSE: LIT) ETF — FMC Corp. (NYSE: FMC) and Rockwood Holdings (NYSE: ROC) — are each up more than 20% on the year.

Currently only about 23% of produced lithium goes to making batteries. With the lithium battery market slated to grow at over 18% annually, it could put a strain on lithium supply and send prices higher.

In the last two years alone, lithium demand has grown 25%. It's expected to double by 2020.

Toyota has gone right to the source as well, partnering up with Orocrobre (TSX: ORL) to build the first large-scale brine-based lithium project in 20 years. It's expected to produce 17,500 tonnes per year.

As the lithium battery market continues to mature — which will include continued consolidation — it seems the smartest way to play it is through the international manufacturers and miners with access to the best resources, rather than take on unnecessary risk betting on unproven entrants.