Now is the time to take advantage of the graphite bull.

Prices for the mineral have surged 250% in the past few years thanks to a number of factors.

Here's what you need to know...

For starters, graphite is kind of in a “rare earth” type situation because 70% of supply is controlled by China.

Industrialization in that country — as well as in India and other emerging markets — has led to increased demand for graphite in its traditional use as an additive to steel.

The 30% of supply that comes from outside of China is typically used in full by the country where it's mined.

There's only a handful operating graphite mines in the entire world.

So take a look at what all those various market factors have done to graphite prices in the last five years: 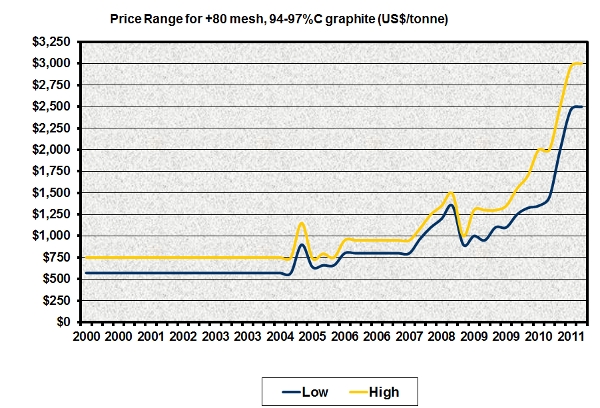 These prices are only expected to rise as China, India, Brazil, and other emerging markets continue to mature and drive demand through typical end uses... and because of new uses for graphite that are expected to increase demand even further — like lithium-ion batteries, fuel cells, vanadium redox batteries, and pebble bed nuclear reactors.

I bet you didn't know there's 30x more graphite in a lithium-ion battery than there is lithium.

Their use is only going to grow as they become the go-to batteries for power tools, electric bikes and scooters, and hybrid and electric vehicles.

The future need for graphite is so great — and its current production so scarce — that both the United States and the European Union have labeled graphite a “critical supply metal.” 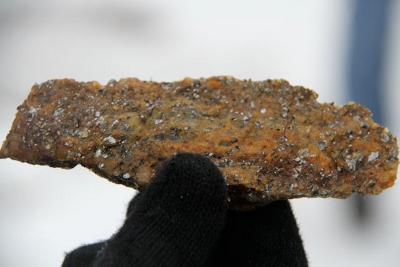 I've mentioned graphite to you a few times already.

The time to get in is now — before the mainstream comes running.

They're already getting wind of the profits about to be made...

Just look at some of the related headlines I found from the past few weeks:

I've said this market was shaping up to be just like the rare earth run of 2010. And so far, the trajectory it's taken has been identical...

Like rare earths, China controls more than 70% of production.

Like rare earths, China is starting to manipulate the market — adding export quotas and taxes and driving up the price.

Like rare earths, the need for this mineral is only rising, thanks to high-tech devices and batteries.

Like rare earths, companies outside China that have a real graphite supply will deliver thousands of percentage points to their shareholders.

Because like rare earths, there are many dishonest companies out there trying to jump on the bandwagon.

I've even seen a few that have changed their name to incorporate the word “graphite” in an attempt to trick naïve investors.

Don't be fooled. There's only one way to play the graphite bull market.

And that's with the one company that owns a 100% interest in the largest graphite mine outside of China.