What Inelastic Demand Means for You

They're lofty goals, and they'll generate serious profits. In fact, fortunes have already been made from the public-facing technologies like wind and solar.

But for the industry to progress as quickly as planned, there are several hurdles that need to be overcome. And that's where the crazy money will be made.

Wind and solar are great. I've made money off them, and I've helped investors profit from those sectors — and I will continue to do so.

But what happens when the wind doesn't blow or the sun doesn't shine? How can these resources provide baseload power if they are intermittent?

The answer is advanced energy storage. . . and it's worth billions.

The Need for Energy Storage

Here's a blurb from the Christian Science Monitor that puts it in perspective:

While the Obama administration presses to expand renewable energy with emphasis on growing wind farms and utility-scale solar, these efforts could vastly increase the need to build new backup power plants — much of which today involves firing up natural-gas turbines when the winds die down. The only way to avoid using fossil fuels is to develop grid storage.

If solar power isn't available at night, for example, it can never become a source of baseload power like coal or natural gas. Large scale energy storage can change all that.

So when the wind is blowing and the sun is shining, some power is delivered to the grid and some is stored for later use — after the sun goes down or when wind speeds decline.

The problem — until now — was that energy storage technology was not advancing as fast as energy production technologies, and costs were not falling as quickly.

That gap is now narrowing, which means profits on both fronts for those in the know.

And the best part is, energy storage is a can't-fail sector. It's critical for the rapid expansion of renewable energy. And Congress is guaranteeing its success.

Investing in Energy Storage, an Introduction

This sector is so vital that it will soon approach inelastic demand. That means suppliers of energy storage technology will be able to raise prices without reducing demand. . . great news for investors.

And like I said, Congress needs this to happen, or their grandiose plans for renewable energy are moot. They are propelling this industry with billions of dollars of stimulus money and other programs through national laboratories and partnerships.

It's a big sector with multiple technologies. So before you take the investment plunge, you should be aware of all the different types of energy storage devices that exist:

There's a market and a company for each of them. The trick is nailing down the right time to invest in the right sector.

Take lead acid batteries and superconducting magnets, for example. Two companies to watch there are Enersys (NYSE: ENS) and Maxwell Technologies (NASDAQ: MXWL). Look what those two have done recently: 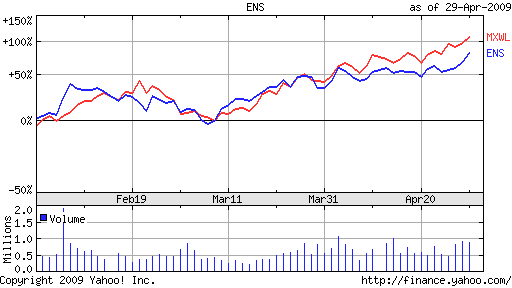 I think it's safe to say there is money to be made here. It's estimated that energy storage will morph into a $600 billion industry over the next decade — not to mention it's the missing link to propelling renewable energy from marginal to mainstream.

And yet, it gets much less attention than its solar and wind cousins, giving savvy investors a brief window of opportunity to beat The Street to the punch.

For more on the emerging opportunity of energy storage, including reports and detailed recommendations, you'll want to consider joining Alternative Energy Speculator.

We've already taken one round of smart grid profits and are positioning for the next. Your gains from just one recommendation in this sector will pay your fee for years.

Smart Profits on the Smart Grid
Energy and Capital editor Chris Nelder discusses smart metering and other smart grid technologies, and suggests six companies that are well positioned to profit from the grid's transformation.
Unveiling Smart Grid Companies
Energy & Capital editor Nick Hodge discusses smart grid companies in light of the billions of federal dollars now available to the sector.
The Smart Grid
Green Chip editor Nick Hodge defines the smart grid, and outlines how to profit from what will be one of 2009's hottest sectors.
Hydrogen Fuel Cells: The Downfall of Tesla?
Lithium has been the front-runner in the battery technology market for years, but that is all coming to an end. Elon Musk is against them, but Jeff Bezos is investing heavily in them. Hydrogen Fuel Cells will turn the battery market upside down and we've discovered the tiny company that is going to make it happen.