IMF to Include Yuan in SDR

What will it mean for gold?

The International Monetary Fund just made a move that could help lift gold prices...

But immediate effects on prices of the yellow metal are unlikely.

On Monday, the IMF announced that the Chinese yuan will join the fund's elite basket of currencies in the organization's special drawing rights (SDR).

The yuan will join the U.S. dollar, euro, British pound, and Japanese yen in the SDR, effective October 1, 2016.

But after the collapse of the Bretton Woods system in 1973, the IMF redefined the SDR as a basket of currencies.

The SDR is neither a currency nor a claim on the IMF. But it gives IMF member countries who hold it the right to obtain any of the currencies in the basket to meet balance-of-payments needs. The IMF also issues its crisis loans — like the loan the organization gave to Greece — valued in the SDR.

In total, the value of the SDR expressed in USD is currently about $280 billion.

Chinese leaders have been lobbying for the IMF to add the yuan to its basket of reserve currencies, which it uses to lend to sovereign borrowers.

For China, the IMF's decision to include the yuan in the SDR is a big win.

Adding the yuan as a reserve currency will allow central banks to buy more of the Chinese currency. But the inclusion of the yuan may also result in lifting gold prices in the future.

A boost in the demand for the Chinese yuan as a reserve currency may have the opposite effect on the U.S. dollar.

And because world foreign reserves of U.S. dollars are so massive (around $4.25 trillion globally), even a slight percentage decline in the demand of the greenback as a reserve currency would result in hundreds of billions of dollars' worth of money supply flooding the market.

But of course, the demand coming from central banks for the yuan as a reserve currency will remain limited in the near term. And I certainly don't believe that the inclusion of the yuan in the SDR is a death knell for the greenback.

However, it is within the realm of possibility that the yuan could eventually end up replacing at least some USD reserves. And any challenge to the hegemony of the U.S. dollar as the world's main reserve currency is critically important to gold — even though the two were decoupled over four decades ago.

The gold market currently continues to focus on the U.S. Fed's rate decision coming in two weeks. Gold prices have experienced heavy pressure as the confidence in a rate hike grows, closing down 22 out of the last 27 trading sessions. 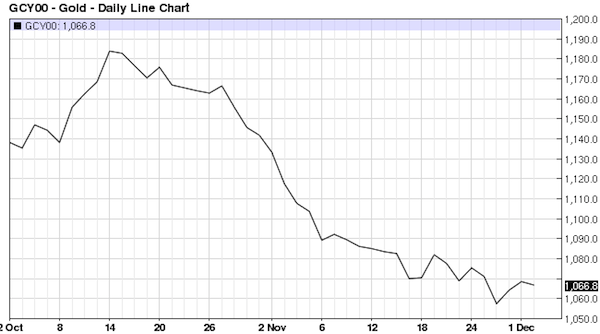 At this point, I believe the majority of the damage to gold has already been done — even though we'll no doubt see continued pressure until the Fed's decision is officially announced and there is a knee-jerk reaction to prices upon immediate news of the decision.

For the time being, I would hold off on buying gold. However, I am quite bullish on gold in 2016 and beyond.

Over the next few weeks, I'll be looking at several gold investments here in Energy and Capital for the coming year.