How to Invest in the Future of Energy

5 Ways to Game the Energy Market

Secretary of Energy Rick Perry is there.

So are Michael Bloomberg and the CEOs of Duke Energy and XCEL Energy.

They’re meeting with the most important people in the energy market today to discuss, well, the future of energy.

Hosted by Bloomberg’s New Energy Finance, this invitation-only event brings together the gatekeepers and market-movers of the global energy economy. And they're there to discuss the future of energy, not the past.

The event is not a staging area for politics or investment opportunities.

It’s simply the nerve center of the world where future trends in energy are disclosed, debated, and accepted as the reality of a new energy paradigm.

And this is what we heard yesterday...

There are more clean energy jobs in California than there are coal mining jobs in the entire nation.

The future of transportation is autonomous, likely to be jointly owned, and is probably going to be electric.

Nuclear and coal are not economical. But if you want to stay around and lose hundreds of millions of dollars, you have the right.

Electric vehicles will cost less than internal combustion vehicles in the 2020s. 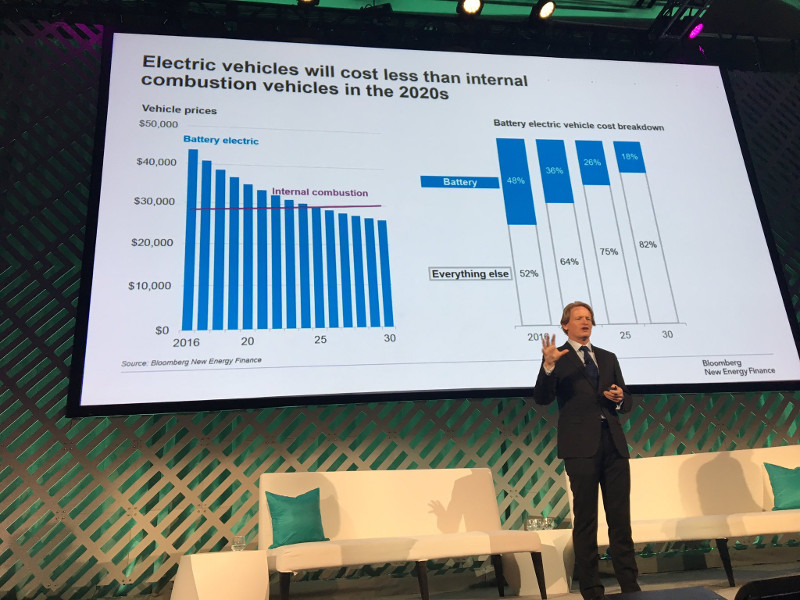 Although there are plenty of representatives from the oil, gas, and nuclear industries, there’s one common theme that’s monopolizing the conversation amongst the world’s smartest people in the energy industry: technology.

Looking at the future of energy, all energy investors must acknowledge and, of course, profit from a few realities:

What does this mean for investors?

These are not predictions, my friend.

You see, a prediction suggests something that might happen.

There are a lot of folks who predicted Donald Trump would lose.

That prediction, like many other predictions, was made based on research and data collection on opinions and wonky algorithms.

But the future of energy is not predicated on anything but that which has already been substantiated by real-world scenarios.

Now, I realize this may not sit well with some, but my job is not to placate those who still have skin in the fossil fuel game. My job is to help folks profit from the continued evolution of the global energy economy. And that energy economy, dear reader, is one that is well on its way to being dominated by renewable energy, energy storage, and a boatload of new energy technologies that will ultimately make fossil fuels about as necessary as a flip phone from 2005.

Sure, you can use it. It still works, can make phone calls, and even take pictures.

But aside from a few holdouts, nobody uses those things anymore because today’s modern smartphones are, for lack of a better word, better.

Of course, I understand there are still some people reading this who are shaking their heads and getting ready to leave a hostile, hate-filled note in the comments section. I know this because the same thing happened when I first sang the praises of Tesla (NASDAQ: TSLA), back when it was trading at $40. Today it trades for more than $300.

The same thing happened when I told investors to buy legal cannabis producer Canopy Growth Corporation (TSX: WEED) back when you could buy it for $1.50. Today it trades for nearly $10 a share. That puts us up more than 500%.

My point is simple: My analysis tends to be controversial. But it’s insanely profitable. And I’ll take profits over the backlash of controversial statements any day of the week.

If you feel the same, click here to see what I’m investing in now.